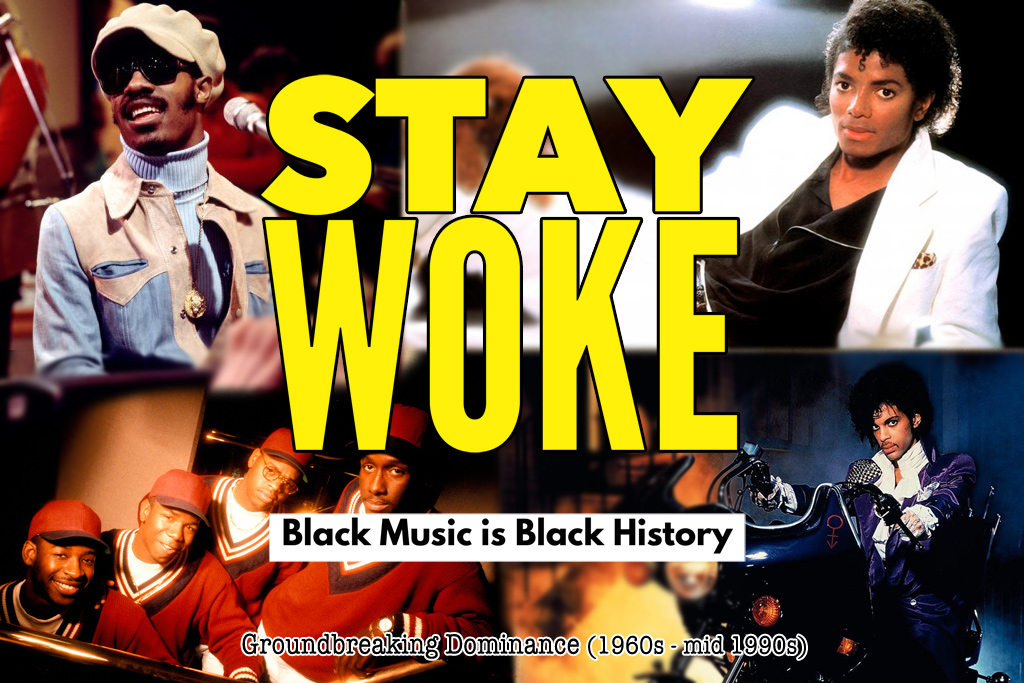 This week’s “Stay Woke” segment is a continuation of the very first segment, Origins of R&B. While Little Richard, Ray Charles, Chuck Berry and B.B. King were able to lay the foundation of R&B music and experience crossover success in a segregated America, they weren’t protected from having a lot of their music and sound stolen by white artists, nor were they afforded the worldwide success (until much later in their careers) their talent deserved at the time. That would all change in the 1960s, while breaking ground socially and politically, R&B as a genre was simultaneously breaking new ground commercially.

At the helm of this push to worldwide domination was one man named Berry Gordy. Gordy famously founded Motown Records in 1959 and would go on to architect the careers of legendary R&B acts such as The Temptations, The Supremes, Marvin Gaye, The Four Tops, The Jackson 5 and The Miracles. Between 1960 and 1969, the record label would chart 79 Top 10 hits on the Billboard Hot 100, their first hit being The Miracles’ “Shop Around” in 1960, Motown’s first million-selling record. Motown is largely credited as one of the strongest integrating forces in pop music history. The artists weren’t just popular in the black music market but successful superstars with a reach that spread across the globe. Berry Gordy is often remarked as saying that he wanted his music to equally appeal to white and black people. It is with this mindset that Motown became one of the most successful independent record labels and black owned businesses of all time.

Speaking of Motown we can not forget the incomparable Stevie Wonder.  Signing with Motown at the age of 11, during the ’60s Stevie was a famous child prodigy with hits like “Fingertips” and “Uptight (Everything’s Alright)” but it was his dominance in the 1970s that would take R&B music to another level.

When speaking on an artists’ peak, few have one that lasts more than one album or a 1-2 year period, but Stevie Wonder is nothing like your normal artist. Stevie Wonder has what is considered to be his “classic period,” a period consisting of five years and four albums where a majority of his famous hits were created starting with 1972’s Talking Book, 1973’s Innervisions, 1974’s Fulfillingness’ First Finale and lastly 1976’s Songs in the Key of Life. Stevie Wonder was so prolific in the early to mid 1970s that he would go on to win a slew of Grammy Awards, including Album of the Year three consecutive times! He won back-to-back Album of the Year Grammys in 1974 and 1975 for Innervisions and Fulfillingness’ First Finale and his last Album of the Year Award for his third consecutive album in 1977 for his most famous work Songs in the Key of Life. This kind of domination and critical appreciation for Black music can’t be understated. There are a ton of legendary Black artists who have never even received a Grammy (including Diana Ross and Bob Marley) much less the coveted Album of the Year Award. Typically relegated to “niche” categories, Black music is rarely awarded in major categories. To further drive this point, it’s only been twelve times that a Black artist won Album of the Year in the Grammy’s 60 year history and Stevie is responsible for three of them.

The next Black artist to win Album of the Year would be none other than Michael Jackson in 1984 for Thriller. The door that was opened by James Brown, Stevie Wonder and others would be blown off the hinges following Michael’s iconic and legendary ascent in the 1980s. Michael Jackson’s Thriller became the biggest selling album of all time, a record it still holds this very day and his hit single “Billie Jean” became his most successful song and it’s live performance on the Motown 25 special catapulted him into icon status as one of the most electrifying entertainers we have ever seen! Michael would go on to set many more accomplishments including most number 1 singles on one album (5 from 1987’s Bad), touring records and iconic music videos but Thriller is widely considered his peak and “Billie Jean,” his biggest hit. “Billie Jean” was number one for seven weeks and the music video would almost single handedly integrate MTV and change the canon of music videos forever. Michael Jackson expounded the boundaries of artistic expression in R&B music and made it clear that there isn’t a ceiling on what R&B music can achieve.

Michael Jackson wasn’t the only Black R&B artist to dominate the 1980s and ’90s. His “rival” Prince would mold and forever change the music business as an R&B artist. Prince was also one of the first black artists to be played on MTV with “Little Red Corvette,” increasing the visibility of Black music. An instrumentalist, producer, songwriter, vocalist and more Prince made R&B music that was experimental. Not the conventional pop-R&B that was the norm but R&B that blended with rock, electronic, funk, synth, psychedelic pop and more. Someone with such a hodgepodge variety of musical taste and expression shouldn’t have made it mainstream but Prince was exactly that in 1984 when his movie and album Purple Rain was released. Prince was a phenomena, becoming the first singer ever to have the number one song, album and movie simultaneously.

The 1980s took R&B music to new, grandiose heights. It wasn’t enough to dominate the music charts but to also dominate visual forms of entertainment. R&B music was now popular music in terms of sales, visibility and mainstream acceptance.

The end of the ’80s brought about a change in R&B music. The glossy-pop and R&B that characterized the genre for most of the ’80s had melded into a more industrialized, funk, hard hitting hip hop sound as New Jack Swing became the leading sound of R&B. Which makes the success of R&B group Boyz II Men a shock. Their sound recalled the doo-wop harmonies of the ’60s and musically they became famous for their soft, ballads that were more timeless than pandering to what was hot at the time. Known as the best-selling male R&B group of all time, they have spent an astonishing 50 cumulative weeks at number one on Billboard including the longest running number one single ever with “One Sweet Day” with Mariah Carey (16 weeks). That’s fourth most behind Elvis, The Beatles and Mariah Carey. Their smash hit “I’ll Make Love To You” is their longest running number one solo hit at 14 weeks which is a tie for second longest run ever.

The mid ’90s is as close to an era of male R&B dominance. After the mid ’90s we see pop teen sensations and boy bands take over the music scene and we see black women take the genre of R&B and continue to elevate its status throughout the rest of the ’90s. In fact the biggest selling and most commercially successful artists of the ’90s were black women. Stay tuned for the next segment, focusing on the Black Girl Magic that would take R&B into the new millennium.

1960 – Motown releases their first hit. The Miracles “Shop Around” (peaked #2 on pop charts and #1 on r&b charts and also went platinum).

1974 – Stevie Wonder becomes the first black artist to win Album of the Year for 1973’s Innervisions.

1975 – Stevie Wonder wins Album of the Year back to back with 1974’s Fulfillingness’ First Finale.

1977 – Stevie Wonder wins Album of the Year for the third time with his classic album 1976’s Songs In The Key Of Life.

1983 – Michael Jackson releases “Billie Jean” which would go onto become his biggest hit and propels his album Thriller to become the best selling album ever.

1984 – Prince becomes the first singer ever to have the #1 song, album and movie at the SAME D*MN TIME!