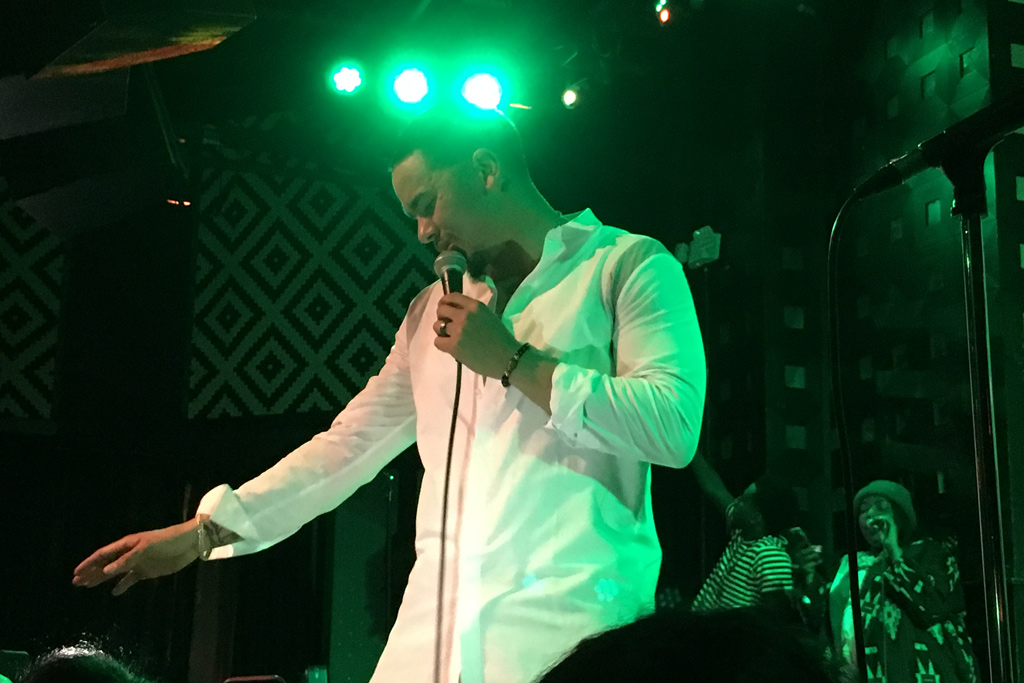 It was drizzling in New York City on Saturday night (Feb. 24) when singer Adrian Marcel was slated to appear at S.O.B.s for a stop on his multi-city “GMFU Tour.”  That didn’t stop devoted fans from showing up to the live music venue dressed to impress and mingle. While the intimate stage embraces the tours opening acts, fans gather throughout the venue. Some sway back and forth in front of the stage while others lounge at the tables on either side. Couples linger around the bar area in the back, already enjoying the night before the tours headliner even steps foot on the stage.

When Marcel finally appears, he is dressed in a cardigan with two bands wrapped around the arm and a white Panama hat tilted slightly over his eyes. While his appearance is reminiscent of an early ’90s Michael Jackson, Marcel isn’t into intricate dance moves. He is, however, a showman in his own right. As he gears up to showcase a few songs from his official debut LP, 2017’s GMFU (or Got Me F**ked Up), Marcel’s sharp gesturing and undeniable vocals make it clear that tonight he owns the stage. When he pauses to officially introduce himself and let the ladies in the crowd know how good they’re looking, a few fans instantly and inevitably shout back “you too!” A confident Marcel doesn’t miss a beat as he smiles, “why thank you, I try.”

Marcel has garnered a bit of buzz since his 2013, Raphael Saadiq-backed mixtape 7 Days of Weak and it’s follow-up Weak After Next. Tonight, the 27-year-old is wholly devoted to musing about love, combining past and present releases to take his audience on a journey through his own romantic experiences. During a passionate rendition of “Timeless,” Marcel takes off his hat, secures the mic in its stand then tilts it, true crooner style, as he belts out his definition of the kind of love he’s seeking. He dives into “NOLIMIT” then strips off his cardigan to get a bit more comfortable during crowd favorite “My Life.” When the latter nears it’s finale, the music stops and Marcel begins to flex his a cappella chops. The crowd begins to sing along with him when Marcel, a polished vocalist, interrupts. “Nah let me do it, don’t sing that,” he says, intent on showing off just what he can do. With his audience visibly impressed, he’s on to “NOMIND” before the DJ takes a moment to get Marcel’s attention. “I don’t know if you notice,” he says. “But, they’re rocking with you.” After the DJ points out specific sections of the crowd that are especially hyped, Marcel decides to amp up the entertainment himself.

Not only is the Oakland, California native handsome and talented, he’s actually quite funny. He mimics girls dancing in the mirror while getting ready for his show and confesses that he likes the smell of hot combs and hair grease. Then it’s time to get serious again. With his music playing in the background and green lighting pouring down over the stage, Marcel caresses his mic stand throughout a sensual rendition of GMFU‘s “IMAGINATION.” But he’s not all about himself. Marcel pays homage to artists new and old, singing snippets of Daniel Caesar’s “Get You,” Khalid’s “Location” and R. Kelly’s “Bump and Grind.” He saves his most seductive moves, however, for his own material. As the music begins for “IMMABEHOME,” Marcel unbuttons his shirt just a bit more and rubs his chest. When he notices a fan recording him on her phone, he grabs her hand to pull the phone in closer as he serenades her. He continues to flirt with the audience through performances of “BEATITUP” and “EYESDONTLIE.” But he especially hits all the right notes during a powerful rendition of “Be Mine,” and an audience member can be heard saying, to no one in particular, “he’s so sexy.”

Soon enough, however, the fantasy nears its end. Marcel acknowledges his DJ and his songwriter before explaining that the first time he came to this city he got booed. Tonight, however the love is real. He thanks the audience before he jumps from the stage. Surrounded by his crew, Marcel saunters towards the back of the venue leaving a satisfied crowd behind him.

Exclusive: Adrian Daniel Performs In Paris On The “FLAWD Tour”