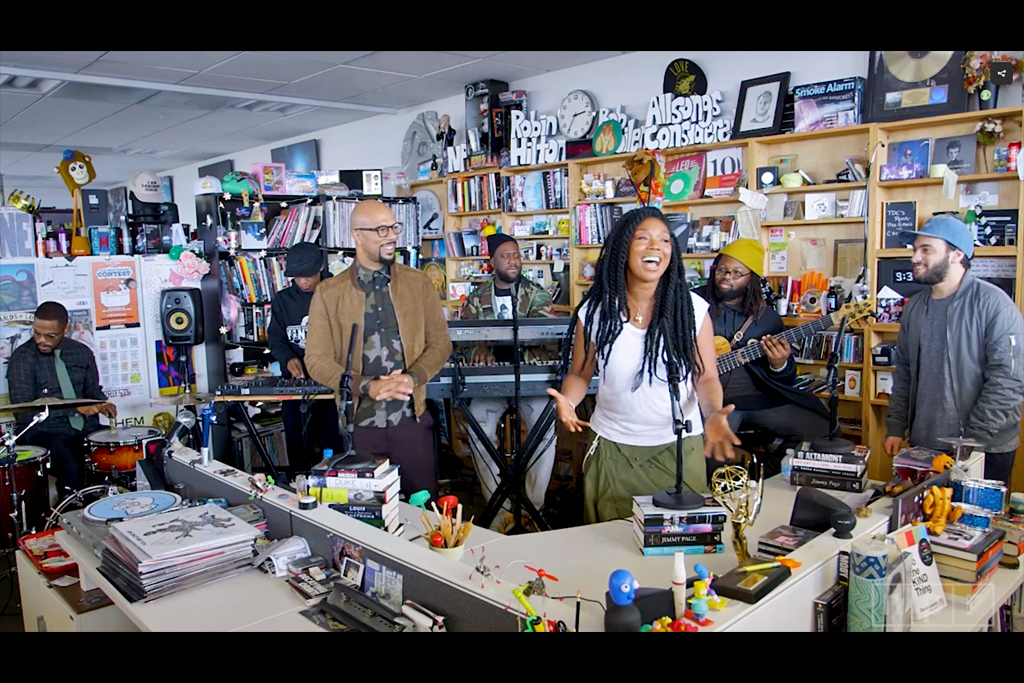 We’ve been in love with August Greene and Brandy‘s recent remake of “Optimistic,” so when they revealed that they were performing it live for NPR’s “Tiny Desk” concert series we knew it would be a must see performance.

Rapper, actor, and activist Common recently formed the group with a couple of friends and collaborators, including GRAMMY Award-winning pianist/producer Robert Glasper, and drummer/producer Karriem Riggins. A simple studio conversation about their love for Sounds of Blackness’ 1991 hit inspired them to remake the classic song. “It was one session we were in the live room and we were discussing music and the song ‘Optimistic’ came up in the conversation,” Common previously explained. “We all talked about how it was one of our favorite songs ever created. That prompted ‘well, let’s do a remake of it. We need to do a remake of it,’ I repeated.” In regards to how they ended up working with Brandy, the Chi-town rapper continued. “Rob said let’s see if Brandy will do it. She just so happens to be one of the greatest voices of all time and her vocal abilities are nothing but divine. So we went into Electric Lady and re-did ‘Optimistic’ in our own way but honoring the original for how incredible and moving it is.”

The transcendent nature of the song and it’s invigorating, uplifting qualities made it the perfect first single and introduction to August Greene as a group and their forthcoming debut album, due out March 9 on Amazon Music.

In addition to performing “Optimistic” with Brandy at the NPR offices, the trio brought multiple special guest vocalists, including Samora Pinderhughes, Maimouna Youssef and Andra Day. Read NPR’s Abby O’Neill’s description of the full performance below.

August Greene, the collaborative effort of Common, Robert Glasper and Karriem Riggins, was born at the White House in 2016 during a special Tiny Desk concert. It was during that unprecedented performance that the then-untitled ensemble premiered the powerful “Letter to the Free,” an original song for Ava DuVernay’s Netflix documentary 13th that eventually won an Emmy for Outstanding Original Music and Lyrics.

For the trio’s first visit to NPR headquarters, they brought some special guests: vocalists Brandy, Maimouna Youssef and Andra Day. The band performed four tracks from its upcoming self-titled album (out March 9 on Amazon Music), an impromptu freestyle, and Day’s Oscar-nominated collaboration with Common, “Stand Up For Something,” from the film Marshall. Common described the theme of the Tiny Desk as “Foregrounding Women,” alluding to the attendance of Brandy, Day and Youssef, as well as the spiritual presence of Glasper’s younger cousin, Loren, who passed just a few days prior.

The past year has been a pivotal time for women, between #MeToo and social and financial equality, and the lyrics to these songs frame women’s contemporary frustrations as civil rights issues. That’s important in hip-hop, which has long been dogged by an old-line adherence to misogyny, as it lays claim to the world’s most popular genre.

In a spontaneous moment midway through Maimouna Youssef’s verse on “Practice,” the crowd gushed and you could see the joy in her eyes. Then the ebullient pop icon Brandy reprised Sounds Of Blackness’ 1991 classic “Optimistic,” and the magic held everyone rapt. Andra Day followed up with “Stand Up for Something”; her powerful voice blew the hinges off the doors.

August Greene’s latest single, “Black Kennedy,” connotes dreams of an African-American dynasty, the kind only a royal family assumes. The stark contrasts of disenfranchisement are highlighted by every wish expressed. Later, in “Let Go,” vocalist and August Greene collaborator Samora Pinderhughes sings of overcoming darkness within yourself and finding hope at the bottom of Pandora’s box. It’s about releasing the demons so the hands can hold the blessings.

August Greene is what happens when talent embraces intention and humility. This edition of the Tiny Desk inspired me, its audience, and the artists behind the stage. We hope it has the same effect on you.