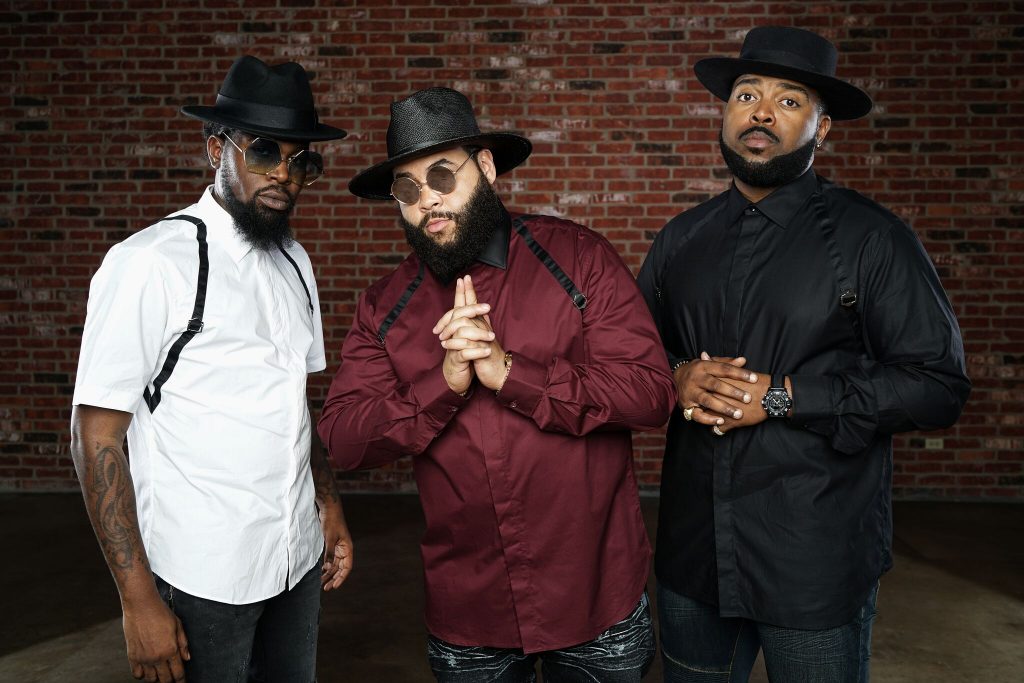 The Hamiltones are spreading their harmonious vibes worldwide.

Comprised of soul brothers 2E, J-Vito and Lelo, their mash-ups of mainstream hits skyrocketed them from singing Anthony Hamilton’s background vocals to their own following of fans. The North Carolina natives’ vintage sound takes you on a trip of nostalgia and new school, as they deliver versatile artistry. They will have you singing the gospel one minute and getting gully the next.

Last month, they fascinated the audience at the Apollo Theater’s first annual GRAMMY’s luncheon with their signature performance of songs from fellow nominees, Kendrick Lamar, Bruno Mars and Cardi B. The charming trio also sang “Gotta Be Lovin’ Me” an upbeat joint from their highly anticipated debut album.

During a quick break from their busy tour, they spoke with ThisisRnB about their upcoming album, how the mash-ups started, and what it was like to work with PJ Morton on Gumbo.

TIRNB: Tell us how The Hamiltones and Anthony Hamilton came together.

Hamiltones: We all sang at an open mic spot in Charlotte where we met Anthony’s musical director Kenneth Leonard. Kenny later got on with Ant and reached back to grab us. So Kenny is the true orchestrator.

TIRNB: Describe your roles in the group.

We all sing, write, and produce.

TIRNB: How did you start doing the mash-ups? How do you choose which songs you’re going to mash-up?

Vito is the guy behind the majority of our mash-ups. Most of the time, he’ll spark up a tune about something going on and we all fall in and add our own flavor. We don’t really choose the song, the song chooses us. We might hear something that’s going on, like current events, and a song just happens on the random.

Our theme is “Young Vintage,” meaning we’re young with a vintage swag. We really pay homage to the old school in our music. We have a few producers we’re working with but the majority of our music is created by us. We’re still in the process of getting features together. Hopefully we’ll be dropping an album this spring.

TIRNB: Which artists/producers do you want to work with in the future?

TIRNB: Your track on PJ Morton’s Gumbo, “Everything’s Gonna Be Alright” is a true feel-good jam.  What was it like working with him?

2E: It was a very dope to work with PJ. He’s a phenomenal musician and vocalist, so it was most definitely an honor to be called to get on the Gumbo project. And then to be part of the live session took it to the next level. Such an honor to say I was a part!

J-Vito: When the opportunity came for us to work with PJ on the song it was a no brainer. We are all fans of PJ and what he’s brought forth to the universe with his gift. With all of what the world is going through, it was time for something uplifting to hit the airwaves to lift the people and that’s exactly what happened. So working with PJ Morton and BJ The Chicago Kid was definitely a great experience. And it’s definitely not the last of this collaboration.

Lelo: Besides PJ’s music, we like him as a person. PJ is like a brother. In real life. From first meeting him on tour with Anthony to working with him on records, this experience has been almost pre-destined. “Everything’s Gonna Be Alright” is a testament of gentleman totally committing themselves to authenticity in a time when that word is seldom seen. Working with PJ, BJ, Gumbo album was long overdue! I’m sure as a collective the bros feel that way as well. God’s work, God’s time.

Stay tuned for new original music from The Hamiltones and their debut album coming soon!