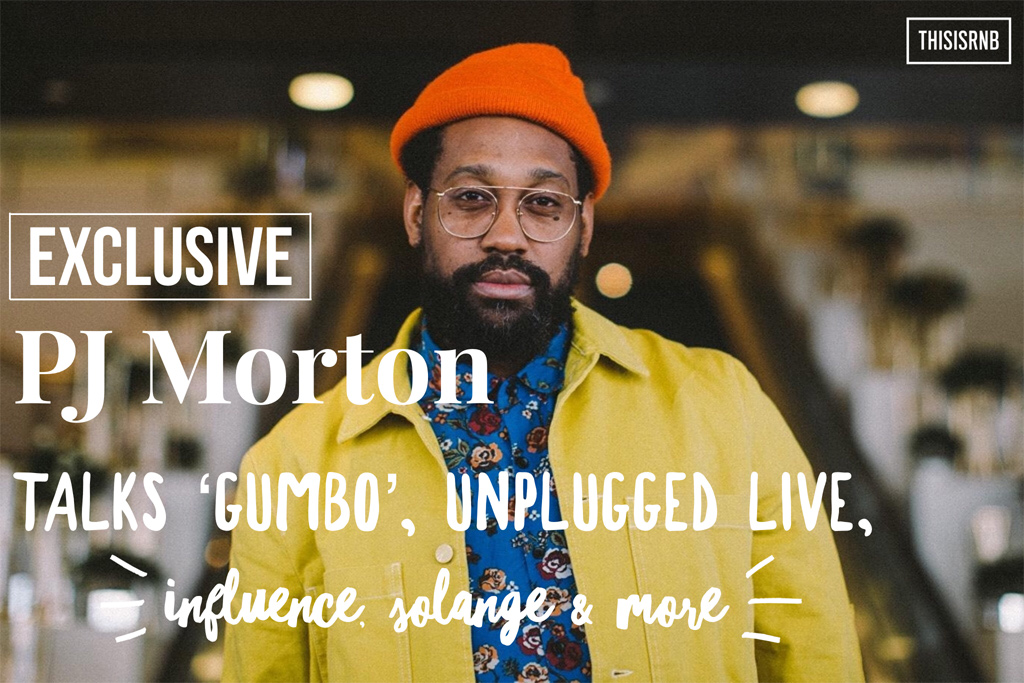 Soul on fire is what comes to mind when you listen to PJ Morton. The singer/songwriter/producer is a musical maverick with a penchant for staying true to his artistry. His eclectic style extends across genres as he also commands the keyboards in Maroon 5.

In an industry that rewards assimilation, Morton boldly resists. His latest album Gumbo is now available as Gumbo Unplugged (Live). The electrifying jam session is an apt complement to the original. Mixing themes of love, individuality, religion and race with soul, funk and jazz produces a sublime experience. Gems like “Claustrophobic,” “First Began” and his first cover on an album, The Bee Gees’ “How Deep Is Your Love,” make a tasty recipe that will have you craving seconds.

ThisisRnB chopped it up with the New Orleans native about how he stays true to self, his philosophy on relationships, how he transitions between genres, what it was like to work with Solange and more.

Check out the exclusive interview below.

TIRNB: How do you maintain your artistry without becoming commercialized?

PJ: I really got into this for the love of it. I was blessed enough to have an amazing childhood. I always had a love/hate for money. Of course we want money, but I never wanted it so much that it would have to sacrifice who I was. I made mistakes through the years of questioning that and not always being 100% sure in that. But ultimately, I’ve always come out on the side of the art. I really believe in it and love it.

Your genre is different from the Maroon 5 genre, how do you go back and forth between the two?

I attribute it to the fact that I’ve been influenced by so many things. You hear the Stevie, you hear the Donny Hathaway and the Al Green, but I was just as influenced by the Beatles and James Taylor and Sting. It’s all in me, so it’s a natural transition for me to go from pop music to soul music. As long as it’s good, I’m down.

Love the video for “First Began.” I love how your children are in there, representing you and your wife. It reminds me of the Black Love Documentary from OWN. What was the inspiration for “First Began”?

How did you pick who appeared in the video?

We wanted people with strong relationships. Of course we wanted stars that people would recognize, but the requirement even before that was people who do this for real, who are really in it and have been in it. We were able to link with Omari [Hardwick] and Sterling Brown and Tamera [Mowry] and Warren and Erica [Campbell] are good friends of mine. We just wanted to find some real relationships.

Your album is an eclectic mix of subject matter. Is there a specific moment that inspired you to write “First Began”?

That’s more in my wheelhouse; the rest of the record was the challenge. Talking about religion, talking about racial tension and talking about creative freedom—it was more of the challenge to write songs about that. Love songs is what I do, I’ve always loved love songs. I can’t say that there is a specific thing, but I do know that I have been through it in my own relationship and seen it in other relationships. Sometimes you hit a brick wall and you can’t get through that wall until you go back to the beginning and find that spark that started it all. You gotta hit the reset button.

Talk about Gumbo, I see your New Orleans roots influenced the title.

I think the biggest influence that New Orleans played was the spirit of New Orleans, the freedom of New Orleans. Laissez les bon temps rouler—Let the good times roll. It’s called The Big Easy for a reason. We kinda lay back and have a good time and enjoy life. I was in L.A. five years before that and it’s very industry minded and very work minded. I needed to get back to the love of the music. New Orleans allowed me to be free and I got back to who I was.

You’re a preacher’s kid, so why was it hard for you to write songs about religion and the state of the world today?

As a songwriter, in general, when you write songs about religion, it’s easy to become preachy and corny trying to put too much of a message in music. I still wanted to make songs that people like and that you don’t have to overthink about. Love is easier on the ears, people want to feel love. I really worked at that, to make it feel good music.

Tell us about Gumbo Unplugged (Live).

The album was nominated for two Grammys this year, so I knew a lot of my friends that were on the record and artists that I love were going to be in New York city, so we locked in and recorded this unplugged version of the album with a 15 piece orchestra and my band. A bunch of guest artists: BJ The Chicago Kid, Lecrae, Keyon Harrold—jazz trumpeter and The Hamiltones. It’s gonna come out as a visual as well as the album. It’s basically bringing the album to life, we did it in front of a small audience.

Talk about your label, Morton Records. What can fans expect from that?

When you’re playing for Maroon 5, you’re part of a group. How do you transition out of that frame of mind into being solo?

They kinda feed each other; each one makes me appreciate the other more. When I’m with the band it takes a lot off of my shoulders an I’m able to be the keyboard player and the background singer. I feel blessed to have the best of both worlds. I appreciate them in different ways; they feed different parts of me.

What would you be doing, if you weren’t doing music?

I got my degree in Marketing, so I would probably be trying to sell and package things. That, or an attorney because I like to debate with the facts.

Tell us about being the music director for Solange’s A Seat At The Table.

Solange brought me on because she wanted to have a lot of local musicians as a part of her  band, so I initially came in as her co-music director. Raphael Saadiq and I helped put together the show for SNL, along with Solange. And then we did a Superbowl show and Jimmy Fallon. It’s just amazing to work with somebody like Solange, because her vision is complete in her head. She knows exactly what she wants, so you really just become a partner and you become a tool for her to get those ideas out of her head and make it make sense to the musicians. My job was to bring her vision to life.

PJ Morton is serving his Gumbo on tour, now. Get a taste of Gumbo Unplugged (Live) below.