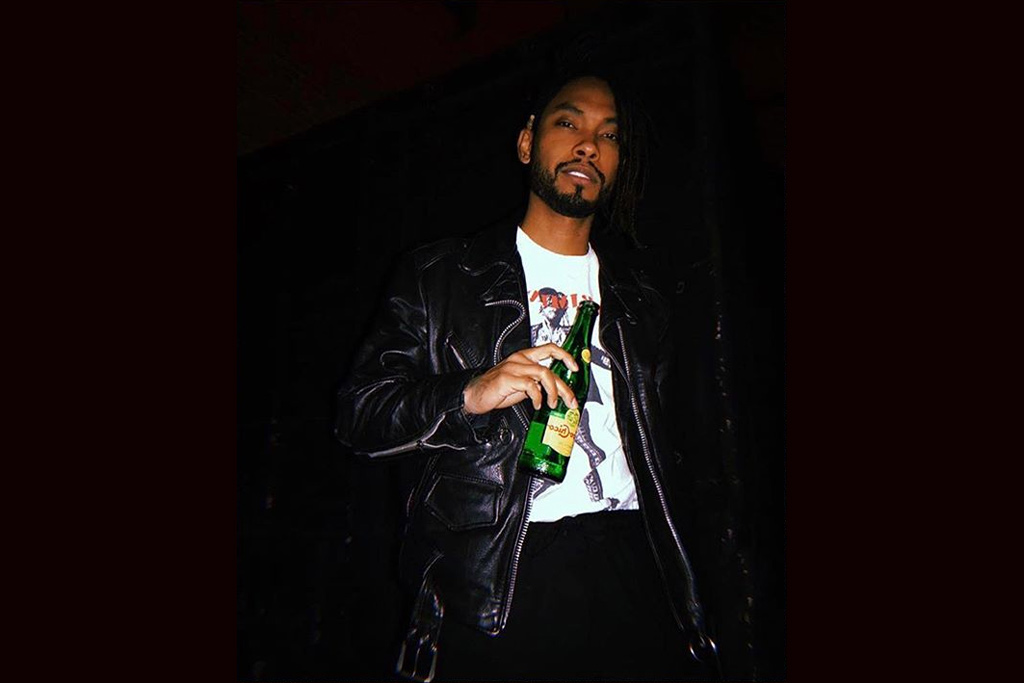 Miguel first captured the hearts of R&B fans everywhere with his refreshing, 2007 debut All I Want Is You.  Now a Grammy Award-winning veteran promoting his fourth studio album War & Leisure at New Haven, CT’s College Street Music Hall (Mar. 16), Miguel and his beyond-passionate audience are eager to celebrate his evolution.  And if the fans that have packed the sizable venue are any indication, Miguel has solidified his status as a bona fide superstar.

Serving up a bohemian vibe in a graphic t-shirt, black pants and shoulder-length locs, the singer’s presence radiates on his elaborate, two-level stage. A slick ramp
extends from the top level to the bottom, with a panoramic screen that transitions between bold imagery and Miguel’s name as the backdrop. The stage also features his band, a phenomenal line-up that includes two guitarists, a drummer and a pianist who stand separately at each corner. But the icing on the cake is Miguel’s golden microphone, which rests in a stand lined with fringe from top to bottom, adding even more drama to the already stellar setting.

The night’s young, culturally diverse crowd needs no warm-up as Miguel starts into upbeat tracks like “How Many Drinks” and “Banana Clip.” When he’s ready to delve deeper into his latest album, Miguel wants to be sure that his audience is on his level. Everyone must say one word: splish. A reference from this album’s lead single “Sky Walker,” Miguel explains that splish is all about “retaining your frequency.” This theme continues throughout the show with Miguel emphasizing the need to balance your energy through the good and the bad.

The enlightened singer begins “Harem,” and the attentive crowd is transfixed as he cries out “follow me, follow me” in what feels like effortless seduction. He sits at the edge of the stage and swerves his hips at the start of “Wolf,” but he’s stretched out on his back as the mischievous track reaches its climax, dragging his body up and down the ramp while he flawlessly hits each note. Perhaps it’s at this moment when it becomes clear: Miguel is playing for keeps. Then, innocently and earnestly, he approaches the audience. “So um… do you like drugs?”  The crowd cheers as Miguel starts into one of Kaleidescope Dream’s stand-out tracks “Do you…” and infuses Musical Youth’s cult-classic “Pass The Dutchie” into the mix as he waves his hands in the air.  Next up is Wildheart’s “Simple Things” before soft lighting engulfs the stage for brief snippets of collaborations like “Lotus Flower Bomb,” “All I Want Is You,” and “Power Trip.” Now only visible as a massive silhouette, Miguel flips his hair forward and leans into his mic during the uptempo “Told You So.” But then Miguel pauses, recognizing how good everyone seems to be feeling. He has a warning, specifically for the guys in the audience. “If she’s not with you, doesn’t mean you can grab on her!” The ladies instantly cheer as Miguel advises that that’s not to go down at his show. He continues with the more serious vibe, bringing out singer Nonchalant Savant, one of the show’s opening acts and Miguel’s real-life brother. Together, they perform an impassioned duet to express their frustrations with massive corporations that influence actual policy.

He thanks Savant and acknowledges the show’s other opening act, promising newcomer SiR, before the half Mexican, half African-American star announces that it’s time to speak some Spanish. Miguel freely Salsa steps through “Caramel Duro” before a more mellow performance of “Come Thru and Chill.” With the stage hazy and the lights low, he begins to offer some insight into his musical evolution. From his introduction to the business with All I Want Is You through to War & Leisure, Miguel acknowledges the constant battle that everyone, from your favorite Instagram influencer to the president, experiences on a day-to-day basis. Tonight, he wants everyone to walk out of the building knowing one thing: they are powerful. “Splish, splish,” he says to reinforce his point. Then it’s back to the music.

The stage now illuminated in tropical colors, Miguel bounces back and forth through “Pineapple Skies,” with a natural rhythm that has fans feeling just as free. As he then prepares to leave the stage, he has one final message: “Everything’s gonna be alright…believe that.” As he exits, the crowd lingers in hopes of an encore. There are a few more songs they need for the ultimate Miguel experience. And just like his impeccable vocals, rockstar moves, and uplifting message, Miguel does not disappoint.

The screams are piercing when he returns centerstage, and they continue through the opening guitar riff of the sensual and explicit “Pu**y is Mine.” The entire crowd is on their feet and sings along through his multi-platinum hit “Adorn.”  Then, as a fitting finale to a mesmerizing show, Miguel closes with a subdued rendition of “Sky Walker.”  Leaving the venue still full of energy, his audience is on cloud nine.