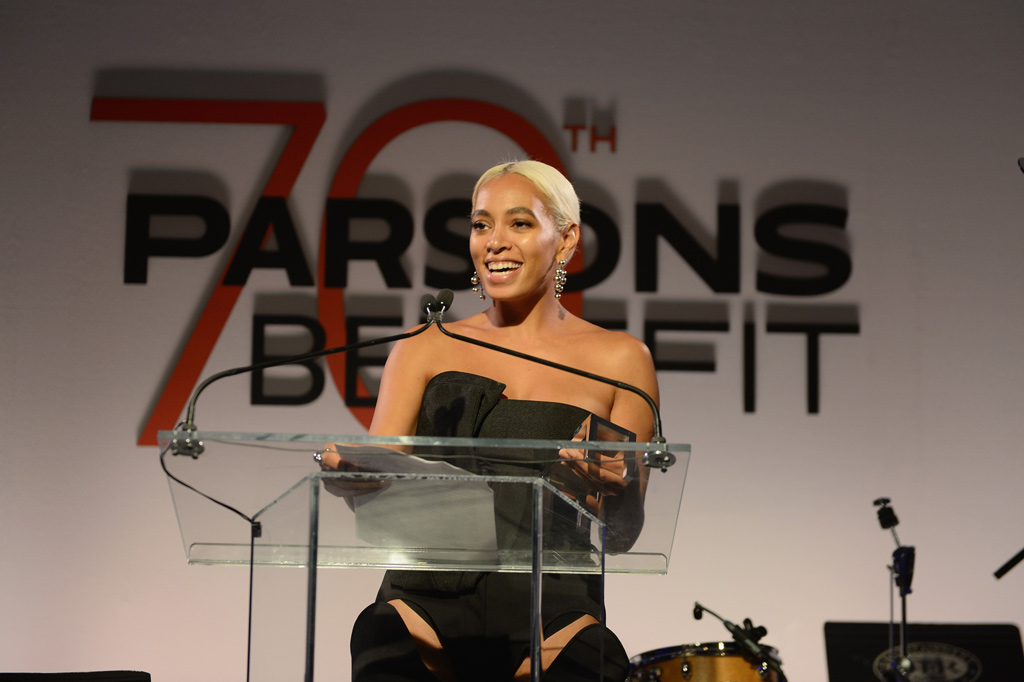 On Monday (May 21), The New School honored Grammy-award winning singer-songwriter Solange Knowles at the 70th Annual Parsons Benefit. The event recognizes individuals that embody the university’s commitment to creativity and innovation. The program featured special video presentations by Pharrell, Missy Elliott, and Erykah Badu along with remarks by Vince Staples in honor of Solange’s impact as a pioneering figure in fashion and art. The event was held at Pier Sixty in New York.

Dev Hynes and Kelela were also in attendance to help celebrate Solange, who joins an esteemed list of past honorees including Rihanna to Donna Karan.

This honor recognizes the positive and far-reaching impact Solange and others have had within the fashion industry through their commitment to supporting future generations of designers and creating opportunities for inclusivity in design, entertainment, and fashion. Parsons, one of the leading art and design schools in the world, hosts the Parsons Benefit, in collaboration with The New School’s College of Performing Arts, each year to present and empower the next generation of fashion designers and performers, and to raise instrumental funds for student scholarships. Donors’ generosity through the Benefit supports education that enables students to pursue studies in art, design, liberal arts, music, technology, and social innovation.

This recognition is the latest in Solange’s heavily esteemed career. In the past year Solange has been recognized with a Grammy, Glamour’s Woman of the Year Award, Billboard’s Impact Award, and Harvard University’s Artist of the Year Award.

From her critically acclaimed album, A Seat at the Table, to performing for President Obama at the White House as well as her performance art shows at the Guggenheim Museum, the Chinati Foundation in Marfa, Texas, and art installation at London’s Tate Modern Museum, Solange has established herself as a visionary within the music, fashion and visual art spaces.

(Photos by Brian Ach/Getty Images for The New School)