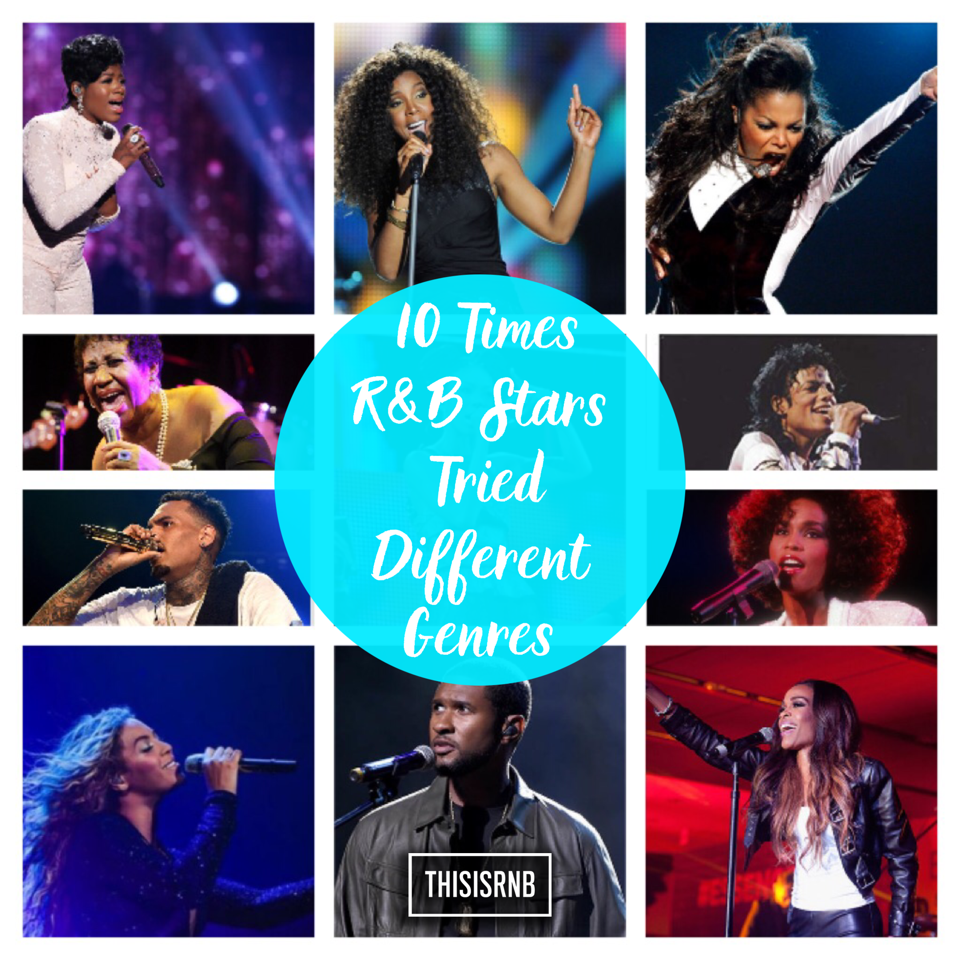 The impact of R&B music can be seen today in virtually all non-classical genres from hip hop (6Black, Drake), to pop (Ariana Grande, Miley Cyrus), and even country music (Rascal Flatts, Maren Morris). And while R&B is experiencing a strong resurgence — thanks to the success of artists like Anderson.Paak and H.E.R and more — it is important to note that there are many examples of R&B stars stepping outside their normal genre as well.

Although R&B artists are rarely celebrated for their ability to successfully take on other sounds, we’ve seen those outside the genre often being praised for using R&B as a vehicle of reinvention. During the recording of her third album, “I Am…Sasha Fierce,” Beyoncé stated that she was told that a great singer can sing anything and make it their own and we definitely agree.

As a way to highlight that sentiment, here are 10 examples of R&B artists who have dabbled in other genres and sounded amazing while doing it.

The Queen of Soul delivered a career defining performance when she belted out  the operatic aria, “Nessun Dorma” – made popular by her friend and fellow superstar, Luciano Pavarotti.

Pavarotti, who was scheduled to perform the song at the 1998 Grammy Awards, had to cancel due to becoming ill. Franklin, who was a late last-minute replacement, agreed to perform the song minutes before the live showing after requesting to hear Pavarotti’s rehearsal. What happened next has often been considered one of the greatest moments in Grammy history.

During her stint on  “American Idol,” Fantasia anchored each week’s genre with her unique voice and brand of soul. On her album, “The Definition of…,” she introduced her Rock Soul genre and included more songs outside of R&B — similar to what she did while competing on “American Idol.”

One standout single on the album is the country influenced track, “Ugly.” Although the subject matter is in line with those previously tackled by Fantasia, it was the conviction and authenticity she brought to the tune that made it soar. By the end, her voice takes flight in the perfect merge of soul and country.

Shortly after being dropped by Columbia Records, Kelly Rowland had the last laugh when she struck gold with her David Guetta featured cosmic hit, “When Love Takes Over.” Although its American success did not mirror its international impact, the song is still credited with breaking Guetta into the American market. It also ushered in a wave of his collaborations with other urban artists like Akon and Nicki Minaj.

To date, “When Love Takes Over” has sold over 5 million copies and ranked at number one on Billboard’s Year-End Dance Club songs in 2009.

Chris Brown’s 2008 hit “Forever” introduced us to his take on dance pop, but his 2011 single “Beautiful People” was an edgier electro house explosion. Brown’s vocals are restrained throughout, but it is a welcome juxtaposition to the song’s rave ready beat. The song was a hit for the singer throughout Europe and peaked within the top 50 in America.

On his seventh album, “Looking 4 Myself,” Usher looked to bridge the gap between his newfound dance audience and his R&B audience. One shining example is the fourth single, “Numb.”

Sonically, the Swedish House Mafia-produced track was made for the clubs, but Usher centers it with his impeccable falsetto, taking what could have been a run of the mill song to the next level.