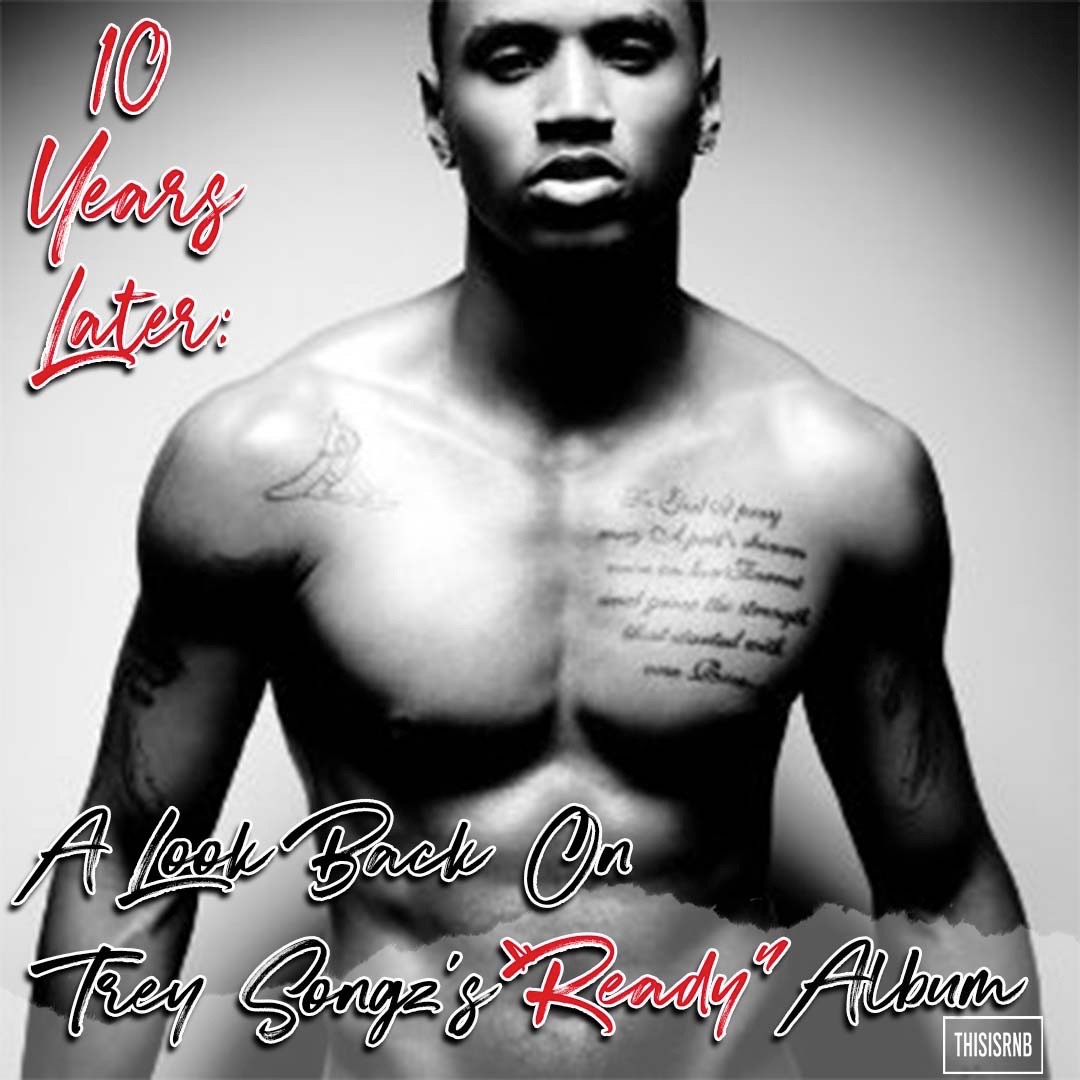 I vividly remember where I was when R&B sex symbol, Trey Songz released his third studio album, “Ready.” It quickly became the soundtrack to my fall semester as it blasted on repeat throughout my tiny two bedroom student apartment. Even quicker, I found out that it wouldn’t be long before Twitter timelines and Facebook statuses were flooded with quotable lyrics pulled from the top 10 album. And while I’m sure 19-year-old me probably shouldn’t have been singing along to the sex-driven lyrics, that didn’t hinder my obsession with the nearly hour-long masterpiece.

The seductive album was expertly produced by Troy Taylor, Bryan-Michael Cox, Johntá Austin, StarGate, and Los da Mystro — among many others. It’s comprised of five singles, various rap features, and — for those who shoveled out a few extra dollars on the deluxe edition — three bonus tracks. Debuting at number three on the Billboard 200, “Ready” became a fan favorite, selling 131,000 copies in its first week and surpassing its predecessor, “Trey Day.”

Earning the artist multiple awards and nominations including a Grammy nom for Best Contemporary R&B album, three BET Awards — two for Best Collaboration and one for Viewer’s Choice — and a Soul Train Music Award for Best Collaboration, the well-received album garnered the crooner comparisons to R&B veterans such as Usher and R.Kelly; both of whom he went on to work with throughout his career.

The album had an undeniably sexy undertone, but also its fair share of romantic moments. In his lead single, “I Need A Girl,” Trey revealed a more vulnerable side as he longed for companionship through his description of an ideal partner. It was the perfect spring tune, both loving and light, and — alongside the release of his “Anticipation” mixtape — built up anticipation for the album until the week of its release in 2009. And while the song does mimic the vibe — and perhaps even the success — of 2007’s “Can’t Help But Wait,” it still managed to evoke its own positive feelings for listeners.

According to Troy Taylor, however — who is responsible for co-producing a plethora of album tracks such as “Neighbors Know My Name” (Patrick “GuitarBoy” Hayes and John “$K” McGee), “Panty Droppa,” “Yo Side of the Bed,” (both with Hayes) and “Holla If You Need Me” (Chris Hines) — getting this album “ready” wasn’t an easy feat.

“Developing the sound for “Ready” wasn’t easy because we went through three major stages of songs, with the final album being the third and last stage.” he revealed to ThisIsRnB. “Some of the songs, however, were put together to form the Trey Songz classic mixtape “Anticipation.” That was the beginning of the wave for “Ready.””

The mixtape, which hosted an album cover similar to that of what fans would get with “Ready,” included songs that essentially could have made the official album and even carried it if given the opportunity. Sultry tracks like “Does She Know” and those with a playful tone like “She Ain’t My Gurl” (featuring Sammie), found a way to simultaneously help hold fans over for the two months leading up to the release of “Ready” and make them yearn for more.

“”Anticipation” was the set up mixtape, but it was delivered at a time where R&B artists releasing mixtapes wasn’t popular yet,” Taylor said. “So, we got looked at sideways by the label. It was also our way of letting them know that we know what Trey Songz is supposed to sound like. ”

And the sound that Taylor, Cox, Austin, and the remainder of the production gang were adamant about proving Trey needed to have, paid off when “Ready” hit shelves 10 years ago.

Kicking off the album with the addicting “Panty Droppa (Intro),” Trigga hooked the crowd upon first listen and proved that he was ready to take things to a more adult level. Setting listeners up for a perfectly arranged album, the flow from the intro into the album’s second track (and Trey’s fifth single and final single from the album) “Neighbors Know My Name” was the needed start and end to any nightcap playlist. It was on this track, specifically, that fans realized that his new persona was in full form and that this album could be ranked alongside some of the past great R&B projects.

“Say Aah,” which featured Fabolous, became the first international hit for the singer and reached number nine on the Billboard Hot 100. It was also the first single of his career to impact Pop radio. The album’s second single, “LOL :-),” tapped Atlanta rappers Gucci Mane and Soulja Boy and showcased a braggadocious side of the self-proclaimed “Mr. Steal Your Girl.” And while it didn’t chart as well as the other singles released from the album, the playful track still found a way to hold its own against other uptempo songs on the project.

“With Producers like B. Cox (“One Love”), $K (“Jupiter Love”), Los (“I Invented Sex”), Maejor Ali (formerly known as Bei Maejor) (“Black Roses”), Chris Henderson (“Be Where You Are”) and Yonny (“Say Aah”) adding in their flavor along with mine, it really gave the album all the elements needed to have what I call peaks and valleys,” Taylor said to ThisIsRnB. “I believe an album should give you all the things needs to either wake up to, get dressed to, eat breakfast to, go to work or school to, have lunch to, get off work or school to, take your clothes off to, wind down to, and also turn up to. This album was created to be the soundtrack of your day.”

And for some, the album would grow to include songs that would become the soundtrack to their lives.

“Successful,” a smooth track with a hopeful tone, was one of those songs and served to be one of two tracks on the album that featured Drake. Although it was not formally released as a joint single for the two talented artists, Drake’s version — which also featured Lil Wayne — helped the song gain popularity with it peaking at number 17 on the Billboard Hot 100 and according to Taylor, was the driving force behind adding it Trey’s album.

The second Drake-featured track, “I Invented Sex” —  which went on to be released as the official third single — topped the Hot R&B/Hip-Hop chart, making it the singer’s first song to do so. Both songs have gone on to be memorable tracks for fans of the former frequent collaborators and helped solidify their spots in their respective industries.

Though the talented crooner takes us on a rollercoaster ride of love, heartbreak, and a good time throughout the entire album, it was with the song that wrapped up the project that displayed a softer side of the sex symbol. Co-written by Trey, Taylor and Hayes, “Yo Side of the Bed” — which sampled another vulnerable and timeless track, Prince’s “Purple Rain” — perfectly rounded out the album by reminding listeners that love, above anything, rules all. And while it may be have been responsible for exposing Trey’s ability to be more than just a sex symbol, it was actually Taylor’s personal life that may have been the influence for the lyrical perfection.

“Writers like E. Miles, Chef Tone, and myself — alongside Trey — made it easy to really lock in lyrically and melody wise,” he said. “I was goin’ through a divorce at the time, so it [the album] was all I had to stay positive. I sequenced the album perfectly to flow with the “no skip” mentality; that was the idea anyway. Trey, however, was in great shape mentally, physically and sonically, so essentially, Trey Songz was ready for “Ready.”

Comfortably placing “Ready” as a classic in our book, this is a personal favorite album by the singer and — even 10 years after its release — proves to be timeless and replay worthy. Perfect for setting the mood on a romantic night or to throw on when you want to feel nostalgic, we’re happy to say that we still enjoy the album in its entirety as much as we did when we first listened.

Elijah Blake Gets Vulnerable In New Visual For "To Be Loved"