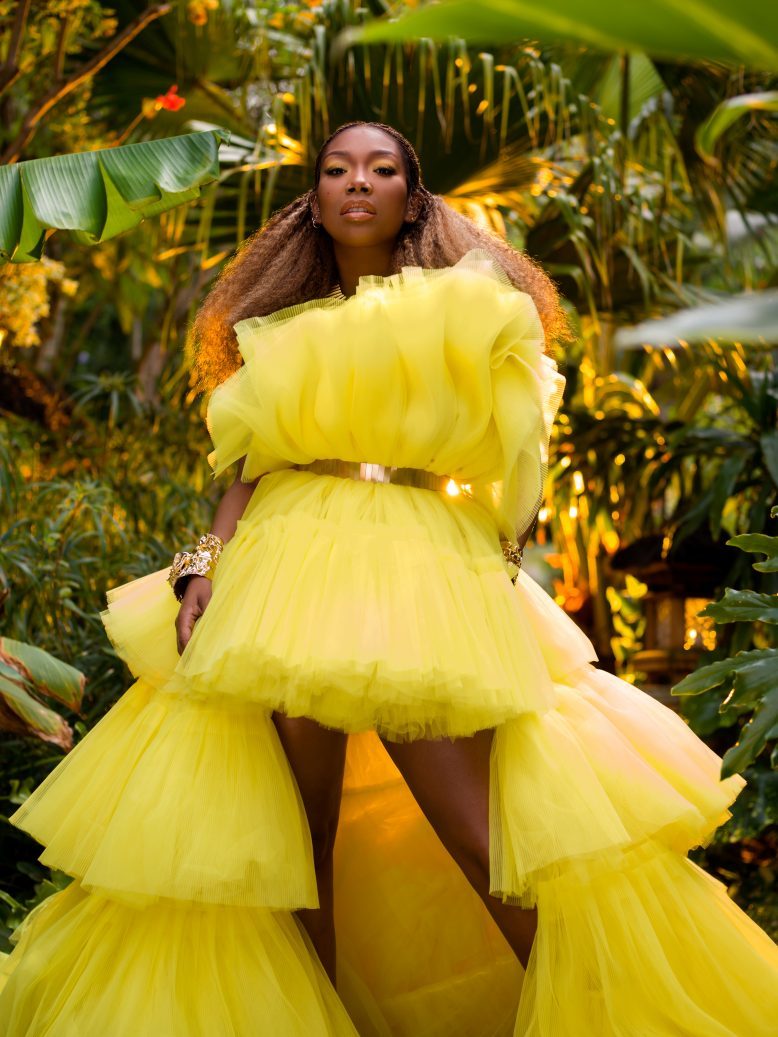 Our very own Vocal Bible, Brandy is back with her seventh studio album, B7. Her velvetesque vocals rise like a phoenix, manifesting completion, as her eight-year hiatus ends. It’s a revelatory release in multiple ways as it is her first independent project on her own label, Brand Nu Entertainment/Entertainment One. Serving as co-writer on each track and executive producer signals a new level for the Grammy Award-winning singer/songwriter.  DJ Camper and her longtime collaborator Lashawn Daniels, who is now deceased, also executive produced. Other featured producers and writers include Hit Boy, Cory Rooney, Victoria Monét, Antonio “Tony” Dixon, Kim “Kaydence” Krysiuk among others.

Countless artists explode and then fade to black, but Brandy models staying power in an industry celebrated for its fickle culture. The childhood star whose eponymous debut album dropped in 1994, when she was 15 years old, almost became a casualty of her personal and professional struggles. But the 15-track B7 is her full circle saving grace.
She knows we missed her, so she apologizes on the opening track, “Saving My Love” as she sings, “Sorry for my tardy/Long time/I was broken-hearted/Hearted and guarded/A target god-damn …”   Yet, she also lets us know that she is a mature woman, not here merely for our trivial consumption. “Just cause I can sing for you/Sounds like Brandy candy/I’m as solid as a Roc without the boat/Kinda like/The goat (Whitney Houston)/But I ain’t saving all my love.” This metaphorical ode to her Cinderalla co-star sets the tone for soul-baring lyrics detailing how she is thriving through the triumphs and torture of fame. The featured image of her wearing a bronze beaded headpiece, on the album cover is also a nod to her idol.

It’s okay, sis, we understand that you’re no longer the perky young adult on “Moesha.” You’ve been through some shit (as most of us have) and we’re glad you’re sharing the ebb and flow of your journey on the vulnerable “Unconditional Oceans,” the alluring “Rather Be” with its mind-blowing transitions and the buoyant “Lucid Dreams.”

Along with B7, the visuals for the dark and edgy “Borderline” are out today. It’s a raw interrogation of Brandy’s relationship with love over a hypnotic, downtempo groove.  The haunting video was directed by Derek Blanks and illustrates the daunting, emotional loneliness that can take over a romantic relationship. “This is my most personal album to date,” she says in a press release. “Every song tells a story.”

Mastering multilayered harmonies is part of what stans adore about Brandy and she fulfills our fix all throughout B7. A couple of cameos from her alter ego, B-Rocka, school us on her multifaceted persona. Her husky vocals push her sweet demeanor aside on the midtempo “Say Something,” followed by the funk-tinged “I Am More,”  and “High Heels,” a collaboration with her daughter, Sy’rai. Sy’rai also did background vocals on the horn led, “Baby Mama” featuring Chance The Rapper.

The album wraps up via a blissful duet with Daniel Caesar, on the Grammy- nominated single “Love Again,” which has garnered over 85 million streams worldwide. Her final words on “Bye Bipolar,” are a diss to her shaky love life. “Bye, bye, bye bipolar/I don’t really want no more disorder/Cuz you strung me like thread/ I was damn near dead/And you fucked with my head like led Russian roulette …/And I cried and cried and cried … /Died and died and died and died alive/Lied and lied and lied/Now I’m high as a kite.”

B7 emulates bold and unfettered epiphanies from Brandy, as she heals herself and others. An unveiling release of her pain coupled with a command of her joy.  Fusing the silky, smooth vibe she established on Never Say Never with the groundbreaking experimentation of Full Moon, delivers a euphonious gospel.

The album is available now at all physical and digital retailers.

'Black Is King'- A Jubilant Expression Of Black Excellence