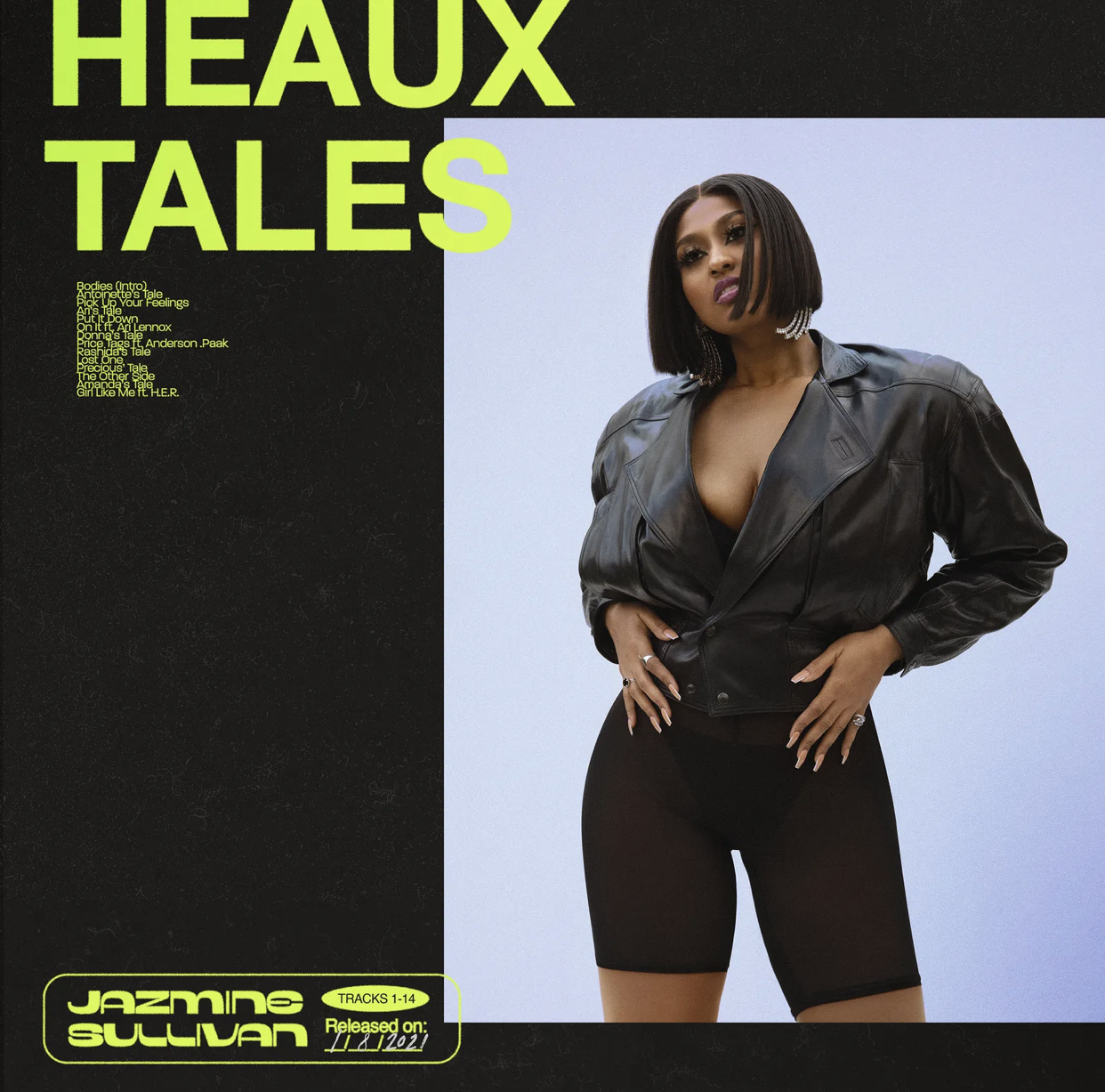 Jazmine Sullivan just set the bar for 2021 R&B with the release of her brand new EP Heaux Tales. It’s her first body of work since 2015’s Reality Show. From finding love to dealing with her mother’s cancer diagnosis, Jazmine has experienced many personal highs and lows during her time away from the spotlight. All that time away has allowed her to come back swinging with this no skip needed EP.

Heaux Tales is Jazmine’s most raw and creative project to date. It’s a deeper dive into the character writing she displayed on Reality Show. On Heaux Tales, she created a conceptual album that’s honest and insightful for both men and women.  She challenges our ideas around gender norms, sexuality, love, and more from a judgement free perspective. It’s like an exclusive peek into the life of the modern woman unfiltered, and without the pressure to present as a “good girl.” I imagine the EP’s interludes mimic conversations found in beauty salons across the country.

The EP opens with the poignant and comedic song “Bodies” on which she reflects on her recent casuals encounter after waking up from a hook-up. Her voice of reason finally decides to check her for “piling on bodies and bodies.” “Antoinette’s Tale” follows and bluntly reminds women that they have to stop relinquishing their sexual power to men because it is theirs to own. This is followed by the brilliant second single “Pick Up Your Feelings.” On “Ari’s Tale,” singer Ari Lennox details her experience of being “d*ckmatized” by a former lover. This is followed by “Put It Down.” The song sums up Ari’s tale perfectly. In short, sometimes the only thing a man is good for is how good he makes you feel. “On It” is the definitive record on the project. Both women bring their best vocals to lyrics that are sure to raise eyebrows. Ari Lennox and Jazmine Sullivan’s NSFW duet is equal parts hypnotic, vulgar, comedic, empowering and genius. I don’t want to ruin anything by saying too much, so I’ll just suggest you listen for yourself. I need to meet the narrator in “Donna’s Tale” because she was spitting ghetto gospel and I love it. On “Pricetags” we learn everything has a price and sex is no different. Jazmine recognizes that her sex is currency and governs herself accordingly. Anderson .Paak’s verse injects a welcome male perspective on this transactional take on love and lust. “Rashida’s tale” followed by “Lost Ones” made me cry. The context that the interlude provides before the song really drives home the meaning behind the set’s first single. “The Otherside” illustrates both the desire of a better life and the fear of going back to broke that is detailed in “Precious’ Tale.” The album closes on the previously reviewed “Girl Like Me” featuring H.E.R. .

On Heaux Tales, Jazmine doesn’t pass judgement, she simply voices the truth. That’s what makes it work so well. It would have been easy to make this EP self-righteous or preachy. Instead, Jazmine personifies the character of each of the women in the interludes from a place of solidarity. She gives a validating voice to the thoughts, feelings and emotions that they are often taught to suppress. This EP isn’t just liberation for black women, it’s liberation for all women. Jazmine, I salute you queen. I can’t wait for what is to come next.

ThisIsRnB’s Must Listen: “On It (feat Ari Lennox),” “Put It Down,” “Pick Up Your Feelings”

Exclusive: The Hamiltones' "1964" The Grammys And More