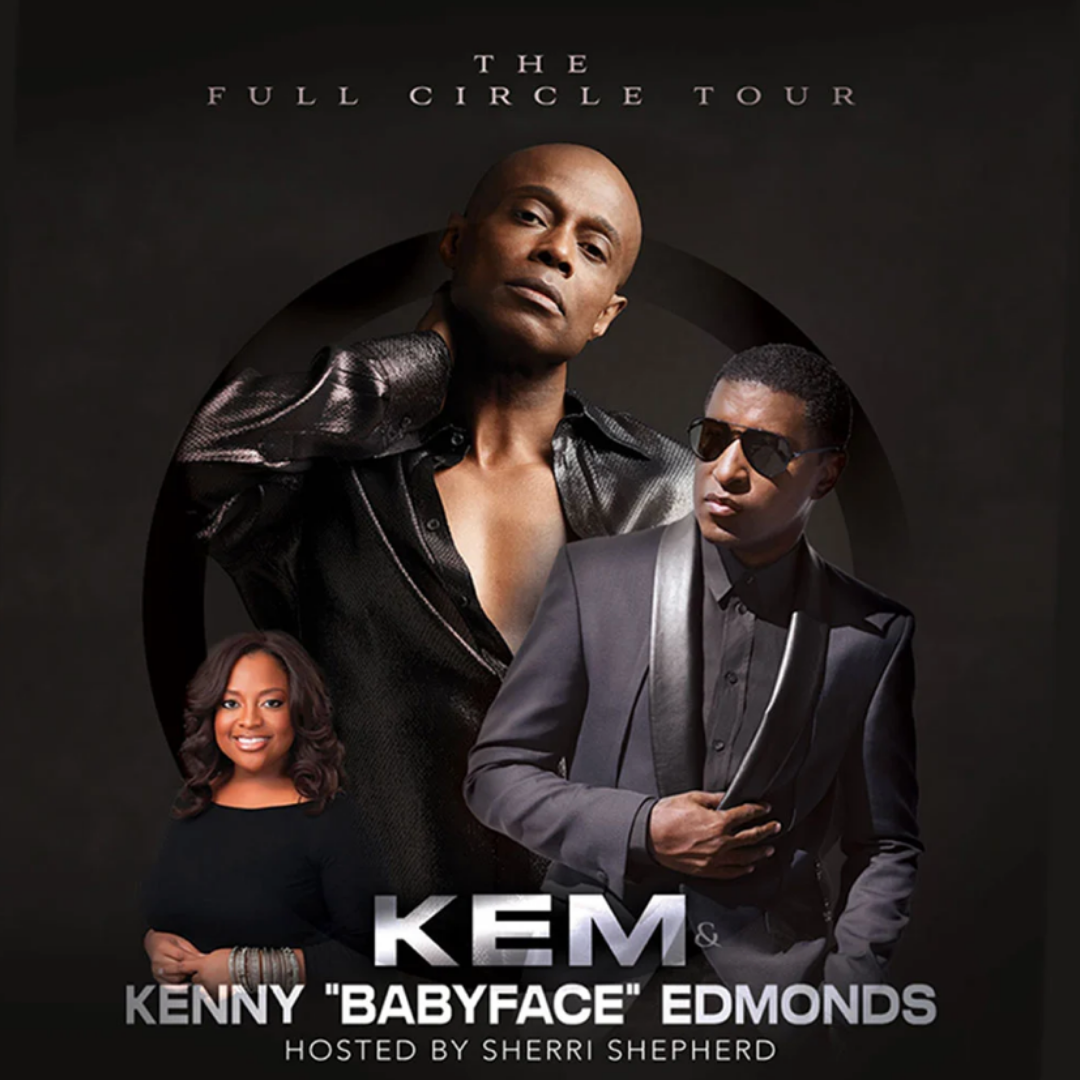 After a long-awaited return to touring, both artists performed in exceptional grand style to a packed house. Designated “The Full Circle Tour,” in support of Kem’s new “Full Circle” EP and single “Stuck On You” a love letter to his wife.

With comedian, actress, author, and TV personality Sherri Shepherd serving as Mistress of ceremonies for the evening, we were thoroughly entertained as she kept the crowd roaring during the pre-show and set openings.

Arriving on stage sporting distinctive black sunnies, highlighting sounds from his massive music catalogue, Babyface took us on a musical journey beginning with his time with The Deele to his emergence as a solo artist, to one of the most sought-after producers.  With his signature redolent vocals on full display, Babyface exceptionally performed a medley of his heart-touching ballads and up-tempos songs that he produced and penned for himself and other great artists such as The Whispers, Toni Braxton, Usher, Bobby Brown, After 7, Tevin Campbell and so many more including the late great Whitney Houston, whom he paid tribute to at the end of his set.

Kem, the quintessential showman personified, captivated our hearts from the very first note. Meticulously dressed in a dapper tailored custom suit, he flawlessly delivered lyrics with precision and vibrancy, as beautiful breathtaking scenery displayed on the backdrop gave us life, tranquility, and peace, providing us with a window into his soul.

The charismatic and charming r&b soul singer served up love and intimacy as he serenaded with rousing hits from his uber-popular and crowd favorites such as “Love Calls Your Name,” “Stuck On You,” “Share My Life,” “I Can’t Stop Loving You,” “Lie To Me,” and countless others.  Swooning and feeling the love, KEM had everyone holding tight to their lovers. You could feel the love in the air.

Kem’s set was tight from the band including Philly’s own guitarist Randy Bowman to the classy dancers’ precision of movement, the extraordinary display of color, and the collage of scenes from popular dance shows, his life, and family including his childhood,  and exceptionally beautiful touching scenes from his recent marriage, it was a visually stunning show.

Kem and Kenny “Babyface” Edmonds came ready and they put their thing down! If you’ve been yearning for some real, timeless, and classic R&B, this is the show for you. This is an R&B experience like no other, nothing short of spectacular on every level, from the artists to the stage sets, to the on-point vocals never missing one beat, two dance steps, or notes.

“The Full Circle Tour” is one show you really don’t want to miss.  Go ahead and click on the link here https://www.ticketmaster.com/kem-tickets/artist/888133 to see when the tour hits your town, and get your tickets now, don’t delay.

Check out some of the amazing highlights from the show below.

Bee-B and Raheem DeVaughn Come Together On New Single "Can We?"