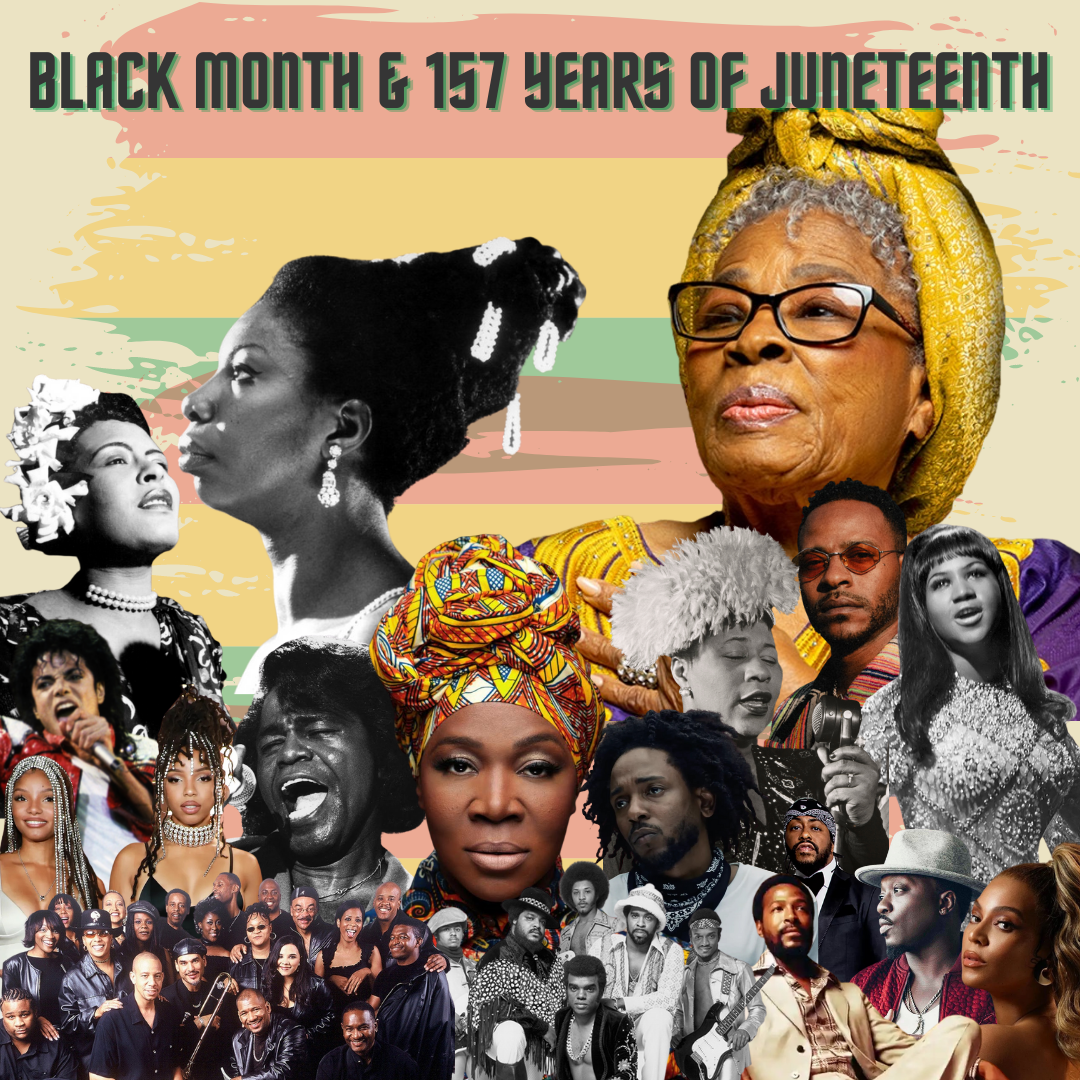 For African Americans, Black music has been the powerful force that connected us to God, and each other, and an impactful omnipotent source of inspiration as we fought for freedom crime after crime and time after time again. It’s been over a century since the army announced that more than two hundred and fifty thousand enslaved Black people in the state of Texas were free by executive decree and there was born – Juneteenth.

On June 17, 2021, ‘The Grandmother of Juneteenth”, 95-year-old Opal Lee stood next to President Joe Biden as he signed the bill declaring Juneteenth a federal holiday. It’s an annual celebration of Freedom, that commemorates the emancipation of freed African Americans. As Blacks fought for equal rights and social justice, they used music to uplift and inspire each other. From the church to the fields where sharecroppers and lumber workers worked with their bare hands – the history and influence of Black music were birthed throughout the deep south before making its way through the Mississippi Delta to New Orleans, the north before impacting American culture at large.  So it is appropriate to say “Happy Juneteenth Day” in acknowledgment and respect for those who have sacrificed so much for their freedom and ours.

it was the hymns and songs that carried the enslaved through the dark tunnels, the underground railroad, and the journey to freedom. Realizing the importance of Black Music, legends like Ella Fitzgerald and Gospel singer Mahalia Jackson collaborated with Martin Luther King Jr. during his campaign for civil rights. Aretha Franklin would later carry the baton and set the example of artists having social responsibility in the music. Songs like Franklin’s “R.E.S.P.E.C.T.” and Marvin Gaye’s “What’s Going On” spoke to us and for us at times in history when it was clear that although freedom was granted on paper – we’d have to take it by ‘force’ through music and non-violent protests.

When Rosa Parks refused to give up her seat, we knew that the next feat would be having a seat at the table – where we have belonged. It was President Jimmy Carter who, 43 years ago, introduced and celebrated Black musicians on the lawn of the white house. The year was 1979 and it was the 7th day of June – he decreed it African American Music Appreciation Month.

Black music has impacted American culture since the 19th century. From strong roots in Gospel that emerged in the 1940s to 1960s, to the rise of Jazz with Billie Holiday, Miles Davis, and Louis Armstrong – African Americans created a new sound with a soul that was unprecedented. Black musicians were at the forefront of 1950s Rock and Roll with artists like Little Richard, Jimi Hendrix, and Chuck Berry leading the way while Blues music grew and expanded to an even newer genre – Rhythm & Blues.

It was Motown Legends like The Jackson 5, The Supremes, and Stevie Wonder that would help shift the perceptions of Blacks and set the stage for the world’s best-selling genre of music “Hip-Hop.”

In today’s post-pandemic world, where the deaths of unarmed Black civilians called for global support and the creation of Black Lives Matter Groups, Artists and Creatives are holding themselves to higher standards and taking social responsibility to not only entertain but inform and inspire generations in the fight for civil rights, social justice, and equality.

From Beyonce’s “Formation” performance to Kendrick Lamar, Eric Bellinger, Indie Arie, and Anthony Hamilton all using their craft of hip hop, rap, neo-soul, and pop to effect change and call for action, the song in the Black Souls live on from our ancestors to future generations – through Black Music.