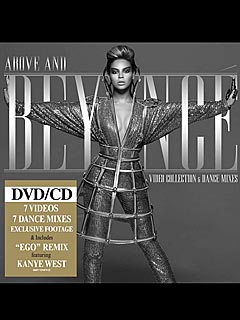 Beyoncé is releasing a new remix album and DVD collection on June 16 called “Above and Beyoncé” A Video Collection and Dance Mixes.

Set for release June 16, Beyonce’s DVD collection, features seven videos including “Single Ladies (Put A Ring On It),” on the DVD portion, and seven remixes on the CD, including Beyonce’s collaboration with Kanye West on the “Ego (Remix)”

As for nabbing West, well, Beyoncé says the rapper – known for his outsized personality – was a good match. Recounting her conversation with West, Beyoncé says he agreed to do it, telling her, ” ‘Okay, so you have a song about an ego and you want me on the record?’ He’s like, ‘I love it. I’ll do it.’ “