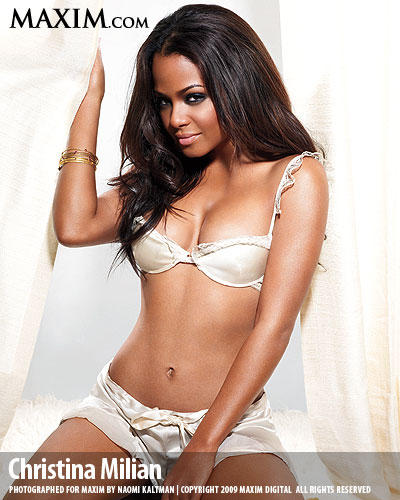 Christina Milian knows how to work a pair of pompoms. A starring role in the latest installment of Bring It On marks the third time she’ll suit up as a cheerleader. “What can I say?” asks the petite and curvy 27-year-old. “It’s the definition of the perfect girl.” It’s hard to argue with that. The hard-working New Jersey native also appeared opposite Matthew McConaughey in the romantic comedy Ghosts of Girlfriends Past this May, and she’s currently putting the finishing touches on her fourth album, Elope. “This record’s lighthearted,” she says. “I don’t think we should take things too seriously. Let’s just have a good-ass time.” Christina, we couldn’t ass-gree more.

Do you go to strip clubs regularly?
Every now and then. I’m for it. Vegas has good ones. I like the Crazy Horse Too. That one’s literally crazy. Only thing I don’t like about strip clubs is the guys will pay the women to give me lap dances because they want to see them dance for me. The strippers will come over and say, “That guy said he’ll give me $100 if I give you a lap dance.” I’m like, “Hey, can we at least split the money?”

What are the most lap dances you’ve had in a night?
At a strip club in Austin. I think I got four, and I didn’t pay for any of them.

You’re in the latest Bring It On film. Did you use the cheerleader outfit as a turn-on for your boyfriend?
I haven’t brought home a cheerleading outfit. Other outfits, yes, like a maid costume: a cute apron with the mitts and a robe, too. It was red. It was really cute. I try a little bit of everything. I’m all about keeping the excitement in the relationship. That’s why I sing songs like “Dip It Low.” When I’m with somebody, I like to keep it exciting.

For Christina’s full article, pick up this month’s issue of Maxim, on newsstands Now!