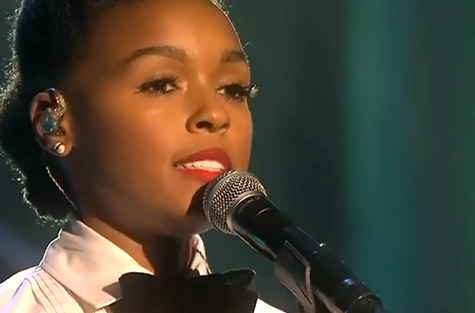 “There was once a time when I didn’t feel empowered as a young African-American woman. So I wrote this song so that you, no matter what your color is, all women and young girls can find their power,” said Janelle Monáe before performing “Cold War” at the Nobel Peace Prize Concert in Oslo, Norway, earlier this month.

Dressed in her signature black-and-white tux, the Grammy-nominated singer also delivered her single “Tightrope” and a cover of the Jackson 5’s “I Want You Back” before the prestigious female honorees. In addition, she joined Sugarland, David Gray, Jill Scott, Ellie Goulding, and more during the all-star finale of Curtis Mayfield’s “Move On Up.”

See the performances below.

ROBIN THICKE PERFORMS "LOVE AFTER WAR" ON THE TONIGHT SHOW

FRANK OCEAN DOESN'T WANT TO BE LABELED AN R&B ARTIST