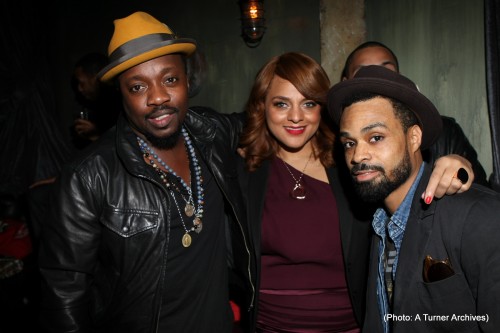 On Friday, Feb. 10, 2011 Grey Goose celebrated the launch of their new flavor, Cherry Noir and Grammy weekend at the Grey Goose Rising Icons Jam Session. The event, which was hosted by Kenny Burns, celebrated some of music’s most talented artists with an intimate VIP gathering at the Sayers Club in Los Angeles, C.A. Guests were treated to live performances by Marsha Ambrosius, Anthony Hamilton, Goapele, Luke James, JoiStaRR, Dawn Richard, Mateo as well as surprise performances by Bilal, Melody Thornton and Gary Clark Jr.

With the help of the Sayers Club’s house band, the performers awed celebrity attendees and other guests with soulful renditions of some of their better-known works and other classic covers. Most notably was Marsha Ambrosius, who performed “Say Yes,” by Floetry and “Butterflies,” by Michael Jackson, Luke James who performed “Love You Down,” by Melvin Riley Jr., and Bilal and Gary Clark Jr. who did a medley of songs by Marvin Gaye and James Brown.

See all the photos below.