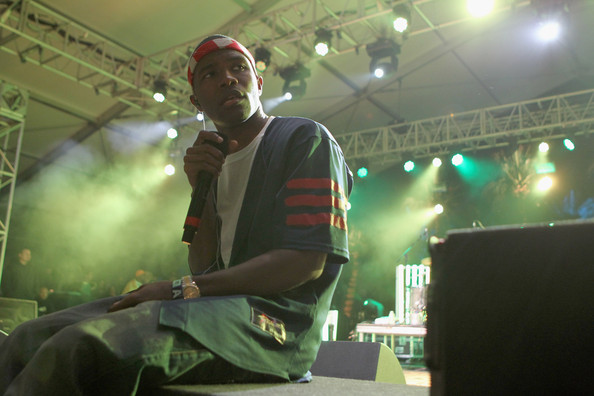 After joining Odd Future at Coachella last year, Frank Ocean returned to the festival Friday night with a solo set consisting mostly of songs off his debut “nostalgia, Ultra,” mixed with his recent new material.

“Coachella, what the fuck is up?” asked the New Orleans native as he took the stage at the Gobi tent, immediately apologizing for technical difficulties. But it was only the beginning of a shaky performance that kicked off with a cover of Bob Dylan’s “Long Time Gone.”

He then delved into his current single “Thinking Bout You,” asking his band to kill the music midway through. The crowd roared when Tyler, the Creator appeared onstage, snapping a photo of his OFWGKTA cohort before performing “Analog 2″ off The OF Tape Vol. 2.

“Whip Appeal” and “Voodoo” were followed by a new song where he referenced Forrest Gump, but it too was cut short. He closed his 40-minute set with “Novacane” and “White,” leaving festival-goers thirsty for more.