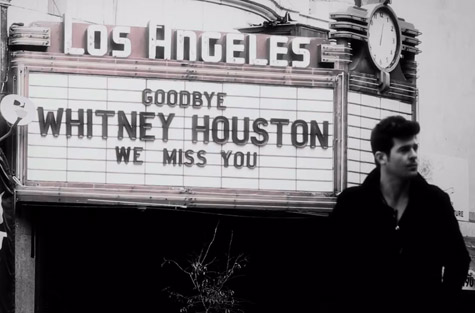 Robin Thicke pays homage to Whitney Houston with the black-and-white video for “Exhale (Shoop Shoop),” his cover of the late legend’s 1995 single. The star of ABC’s new singing competition “Duets” walks the streets of downtown Los Angeles, performing an impromptu concert on the sidewalk as fans pull out their camera phones. He passes by Skid Row and the Palace Theatre with a marquee that reads, “Goodbye Whitney Houston, We Miss You.”