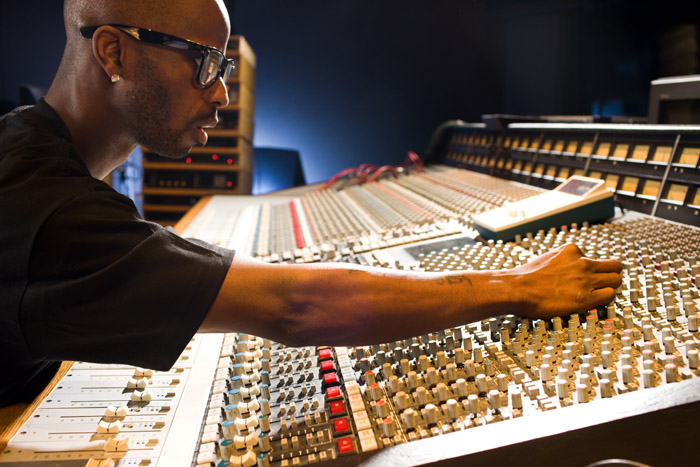 Anyone reading this site should know the name Bryan Michael Cox, for his work and achievements in R&B and music in general. It is clear that the majority of R&B fans are not happy with the status of the genre, between either the lack of love it receives in the mainstream space, or of the music itself. AOL’s The Boombox has taken a step in having a connected insider and professional offer his take on ’10 Gripes’ from fans and listeners.

R&B fans have one very valid argument: the genre has abandoned rhythm and blues for hip-hop and house. R&B does seem to have lost its endearing quality — trading stories of love and passion for some of the more tawdry elements of other music categories. Some supporters say that the issue is with specific artists while others dispute that R&B wholly needs a complete overhaul.

Whatever the issue, The BoomBox has compiled 10 gripes from folks and enlisted one of the genre’s most respected songwriters and producers, Bryan-Michael Cox, to address the increasingly pressing matters of R&B.

Bryan’s Tune: Look Beyond Label Suggestions
“I believe that true R&B fans feel like R&B has lost its spice because of the true merging of the cultures of hip-hop and R&B. When it first happened in the ’90s, it was such a great thing — refreshing and new. I think now what hip-hop has done to R&B is that it’s allowed R&B cats to be a little more lazy in the production of the records. I also think that the labels are just putting out what they think the people want to hear instead of really listening to what the people want to hear and marketing it properly.

It’s made the whole process a lazy process and the labels don’t want to take the time to market an R&B artist the way they used to. Back in the day we had all the Mom and Pop stores, all kinds of in-stores and all these different things that promoted the music and now we don’t have these things anymore.”

Bryan’s Tune: Explore Your Options
“[Laughs] You know what’s so crazy? I think that there was a balance of love in the ’70s — our culture thrived on love. When you think about back in the day, like during the ’70s and ’80s, when love songs were heavy. There was a lot of love, a lot of marriage. I mean of course there was a lot of cheating stuff going on then too, but it wasn’t so saturated. Now the world is about sex and people doing each other wrong. People are selfish and that’s not frowned upon like it used to be. It’s almost like you expect it and nobody should expect to get cheated on but that’s just the world we live in right now and in order to change that, it starts with the creative process. Injecting what Al Green injected back in the ’70s, what the Isley Brothers injected in the ’70s, that’s what I think will bring love back into our music.

There are artists out there that have depth. There’s Anthony Hamilton, Maxwell, D’Angelo’s back, Frank Ocean. So I think it’s possible, but for popular artists, the label kinda controls that. Even Trey Songz has some depth, like “Heart Attack” has some depth to it but all you hear now is [his song ‘2 Reasons’], ‘I came for two reasons…’ and that kind of record kinda outshines the record that actually has some depth to it.”

Why is that, with a lot of bigger R&B artists, there seems to be less of an emphasis on the live show? — Jahshua S., 26, Detroit

Bryan’s Tune: Hold Artists Responsible
“That’s a great question. I think that’s because now there are so many ways to get to an artist. You have Twitter, YouTube, Facebook. I think social media has a direct reflection on why there’s less of an emphasis on a live show because I don’t think these artists care. Like, ‘You can see me everyday. Anytime you wanna see me.’ So when they go live, it’s like, ‘Yeah, we’re gonna perform a song.’ But I don’t think they want to take it to the next level.

I was talking about R. Kelly the other day and I think people forgot how great R. Kelly is. I remember going to a couple of his concerts while he was on tour and R. Kelly puts on a real show like, he’s a performer, he’s a dancer, he does skits and impressions. When he was on the TP3.com tour, he did a whole Stevie Wonder set, where he had dreads, was playing the piano, he had the glasses on and he did a whole 15 minute set of Stevie Wonder songs. I think that if we wanna sell records again, if we want R&B to be a mainstream genre again, we have to demand more from our artists. We have to give more to our fans. Especially live. I hope there’ll be an emphasis put on live shows in the future.”

Bryan’s Tune: Open Your Mind to Other Dimensions
“Wow [laughs]. First of all, I don’t think Trey Songz is terrible. I think Trey Songz is serving supply and demand. I think that he’s efficiently getting his mainstream fans — the fans that buy his records — what they want. I think he’s trying to find his balance though because you know, he has records that have depth to it like, “We Can’t Be Friends,” “Last Time.” He has some depth that sell records and tells stories. I just think that he’s servicing an audience with the big records like, “Say Aah” and “I Invented Sex,” I think that “2 Reasons” is servicing that one lane along with the balance, because you can’t be one-dimensional. I think Trey Songz is trying his hardest to be a multi-dimensional artist.

When will the mainstream get back to focusing on songs that are timeless in everything from the production to the lyrics? A lot of music now is so overt, I want to change the radio station when the kids are in the backseat.” — Soyini Thwaites, 33, Atlanta

Bryan’s Tune: Look for Lyrics of Love
“I agree with that. I feel like what’s happening in music now is that we’re leaving nothing to the imagination. Everything is so direct. So blunt about what’s going on. You have a 4-year-old singing [Rihanna’s] ‘Birthday Cake’ and that’s crazy. But these are the times we live in. I think it’s up to us to keep injecting positive lyrics, keep injecting that love and that storytelling and I think eventually it will all pan out.

I think with storytelling, we have to keep pushing the envelope. Myself, Rico Love, Pharrell, Johnte [Austin], Adonis — the main writers in the business — we have to keep pushing the envelope with our storytelling and hopefully people will like it. People are scared to do that because a lot of artists try and do things like that and it doesn’t really come off as it should. So hopefully it’ll come back around.”

When’s the last time you heard a song classified as R&B actually be soulful rhythm and blues instead of pop? Too many people are trying to crank out hits instead of masterpieces and as a result no legendary artists are emerging. How do we remedy this?” — Majida Sharriff, 30, Brooklyn, N.Y.

Bryan’s Tune: Make R&B Pop
“Here’s the question: What is pop? I think that people generalize that question and they use that word as an excuse. ‘Pop’ only means ‘popular genre,’ so for example, [Usher’s] ‘Burn’ and ‘Confessions’ were the No. 1 pop records in 2004. Those records are R&B. So in 2004, R&B was the popular genre. Now, people think pop, they think LMFAO but pop is not a genre, that’s dance music. That’s one of the popular genres, that’s why whatever’s at the top of the charts can be called ‘pop’ but that’s not really ‘pop.’ Pop can be anything. Country music can be pop.

What the question should be is: When will an R&B artist stick to R&B and stop trying to do the genre of the moment? The last time I heard a song that was actually R&B and not just the popular genre of the moment was Miguel’s ‘Adorn’ record. I think that record is one of the best records out right now. That new Elle Varner record, ‘Refill,’ is an R&B record. She’s not trying to mix. It’s not pop, it’s a ballad. Brandon Hines’ first single that we just put out, ‘Yes You Are,’ is R&B. I think that we’re still making it, we just have to make it a popular genre again.”

Why does Ne-Yo want to be Michael Jackson so badly? It really hurts the music & presentation.” — Kwame J., 21, Winston-Salem, N.C.

Bryan’s Tune: Delve Deeper Into Influence
“Well, you know, I think every artist in some way, wants to be MJ. You know what I mean? I think that’s just an opinion. I think that Ne-Yo is one of the strongest R&B artists out right now. He’s actually, to me, more like Babyface than Michael Jackson, because he’s an incredible songwriter, producer and his lane is that lane. He dances, he does performance things too and I think that’s really where the MJ comparison comes in at but to me it’s more like a Babyface. Ne-Yo’s great and I don’t think he’s hurting, but actually what he’s doing is helping the music business, or helping R&B become more popular, personally. So I don’t really agree with that.”