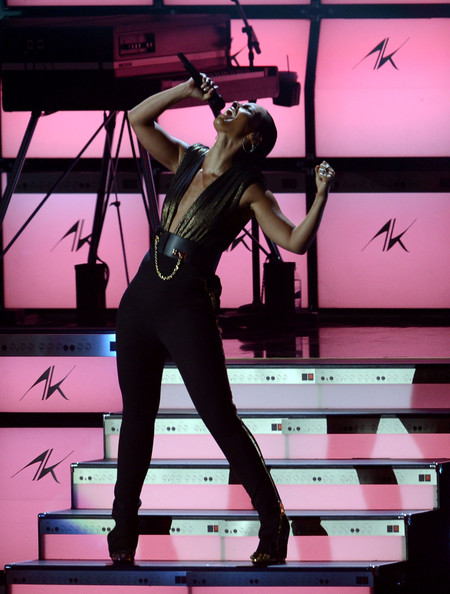 Prior to gracing the VMA stage for the debut performance of “Girl On Fire” last night, Alicia Keys excitedly spoke to Rolling Stone about her forthcoming album of the same name.

“It’s coming in November and I love it. I really am connected to it,” she told RS on the red carpet. “I really believe that when people hear it they’re gonna relate to it in a way that’s gonna surprise them.”

Keys has already demonstrated her skill at writing about love and being socially conscious. How does she think the response will differ from her previous four albums?

“I feel very different, I feel like even the writing style and the way that I’ve been able to access how I feel has gone to a different place and I feel it’s even more raw,” she says. “It’s even more kind of diverse in its topics and I love how it feels.”

Keys wouldn’t compare Girl on Fire to another work, but at a time when some artists question the value of making whole albums instead of releasing singles, Keys says she’s still a fan of song cycles that stand together as complete works.

“I appreciate the way people put albums together, I appreciate more than ever Fulfillingness’ First Finale by Stevie Wonder,” she says. “The way he put that album together just feels like truth.”

Alicia’s anticipated fifth studio album is due out November 27, you can purchase the title track “Girl On Fire” on iTunes now!

Ne-Yo Wants To Have 'Wild Butt-Naked Sex' with Nicki Minaj?