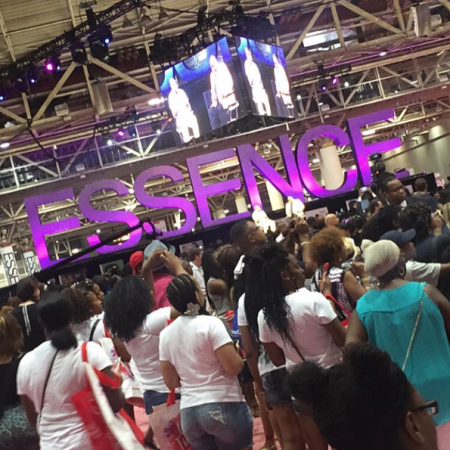 The biggest R&B festival to hit both sides of the Mason-Dixon arrived and landed in New Orleans with full force this past weekend. The annual ESSENCE Festival takes place in The Big Easy every year and this year marked its 22nd year of existence. Pushing out record breaking numbers once again, 2016’s installment confirmed yet again that the powerful festival will always have summer on lock.

Marking my second year in attendance, the list of performers alone made this year one of the best ones in its two decades. Aside from the greatness that hit the stage, the amount of black positivity, Black Girl Magic, and reminders of how much Black Lives Matter, that erupted in New Orleans during the multi-day extravaganza, gave the festival a heightened sense of appreciation that one can only understand if they were in attendance.

From Oprah laying it on the crowd with a super inspirational speech to seeing Puff Daddy & the Family dominate the stage on the closing day, ESSENCE Fest 2016 is one that will go down in the books as the best of the best.

Though we didn’t give as much social media coverage of this year’s festivities as we did last year, we still have some pretty great moments to deliver for those of you that happened to miss out. If you’ve never been to ESSENCE Fest, our recap will get you ready to get your tickets for next year’s installment!

Take a look at it below!

Though last year gave us four days of fun in the N.O., this year only supplied us with three. Traveling from Atlanta to New Orleans, our friends over at Chevrolet had us traveling in style with a 2016 Chevy Malibu. Equipped with OnStar, Apple CarPlay, Wi-Fi capability, front pedestrian alert, automatic parking assist, and much more. Plus, the MPG was incredible! If you’re in the market for a new vehicle, the new Chevy Malibu’s have quickly moved to the top of our list.

After our long drive, we were finally able to check into our swanky hotel. Lodging at the Ace Hotel – which is in a prime location for the festival – there were no complaints for the cost-effective, luxurious quarters. An added plus for the weekend stay was the opportunity to run into some of the celebrities slated to appear at the festival, such as The Internet, Andra Day, Solange, Sevyn Streeter and more. So, if you’re already planning for a place to stay for next year, the Ace Hotel should totally be on your radar.

A special thank you to our friends over at @chevrolet for hooking us up with a smooth 2016 #ChevyMalibu for our #RoadToESSENCEFest travels! What’s up, #NewOrleans! ?? #ESSENCEFestival #ESSENCEFestival2016 #ThisIsRnBTravels

After getting settled, the night began with amazing performances in the Superlounge from Mali Music and The Internet. We even had a few social media takeovers from some artists too! Back in the media room, star of the new BET movie The New Edition Story, Bryshere Y. Gray, gave the crowd his best impression of Mike Bivins. And, of course, concert goers were blessed with Main Stage performances by Babyface, New Edition (who really set it out!), and an incredible performance by the great and incomparable, Maxwell.

Much of the action for day two took place at the Convention Center during the day as many celebrities stopped by and brought their good vibes out for the fans to see. Amongst those that were present were R&B superstars Ne-Yo and Keri Hilson – each of which showed a little love to their fans after jumping off of the ESSENCE Newsroom stage.

Later that night back at the Superdome, stars like Bilal, Common, Dej Loaf, Eric Bellinger, and more dropped by to share some knowledge and talent in the press room. All the stars kept the room busy until the legendary diva Mariah Carey took the stage and in true Mariah fashion, arrived being carried by backup dancers. 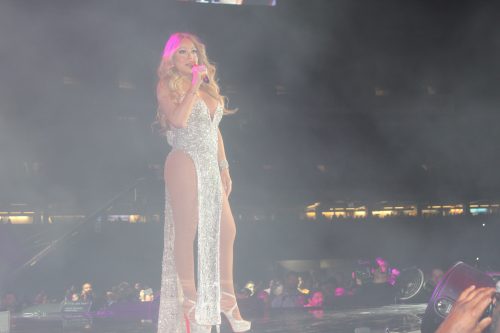 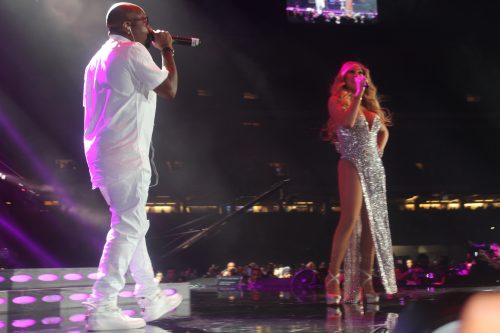 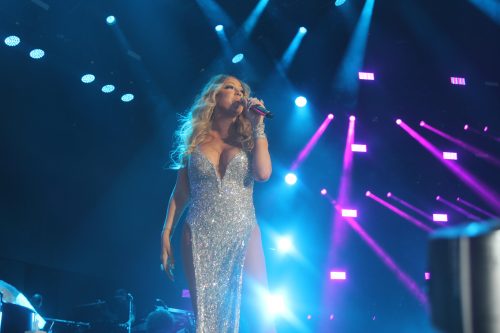 Though Mariah’s inaugural ESSENCE Fest appearance dominated Saturday night at the Superdome, it was the final night that gave everyone all the life they needed. As always, the first two days will make you believe that you’ve experienced the best the weekend has offered, but with the last day of performances, you’ll realize the finale was the perfect way to close out the extravagant weekend.

Getting festival goers ready in the Superlounge were artists such as BJ The Chicago Kid, the talented sisterly duo, Chloe x Halle, Kehlani, and more. Before the night on the Main Stage got moving, festival watchers were blessed with a Prince Tribute that featured songstress Kelly Price, the talented Luke James, Marsha Ambrosius (who announced her pregnancy on stage!), and more. Following the tribute, amazing Main Stage performances followed from ESSENCE lady and new face of McDonald’s, Andra Day, the multi talented Ciara, repeat performer Kendrick Lamar, and the closing act, Puff Daddy & The Family. While each one of the performers held their own, it was the Bad Boy Reunion set that pushed the festival to new heights.

Featuring performances by Puff Daddy, Faith Evans, Ma$e, 112, French Montana, and Fabulous, every song that was played gave the crowd a moving feeling that could have only been felt if you were in attendance.

Had the cutest conversation with the beautiful and talented sisters, @chloeandhalle at this year’s #ESSENCEFest! Make sure you guys pick up their EP ‘Sugar Symphony’ out now!

@marioworldwide came by the #ESSENCEFest press room too! His new album #ParadiseCove is coming soon!! #RnB

Overall, this year was one that will never be forgotten. From the behind the scenes experiences to watching some of the best live performances that 2016 will see, the ESSENCE Festival team continues to find a way to surpass its previous years.

My advice as always? GO TO ESSENCE Fest. Even if you decide not to get tickets to the concerts, the events that go down during the day, that are of no cost, will make your trip worth your while. Now, of course, to keep this post from being extra long and all over the place, I had to leave a few moments out. But, if you’re looking for a way to experience the full weekend, meet us out there next year!

Be sure to check throughout the week to catch our interviews with Andra Day, Chloe x Halle, Raheem DeVaughn, Mali Music, Daley, V. Bozeman, Kelly Price, Eric Bellinger, and BJ The Chicago Kid! And, a HUGE thank you to our sponsors, ecbc, for hooking our artist friends up with some dope backpacks this year!

Bigger things are coming and we’re hoping that you’re ready!

–Words and coverage by Ni’Kesia Pannell