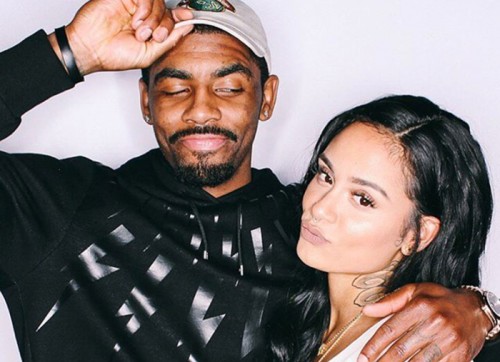 Kehlani and Kyrie Irving are sparking rumors once again as they were spotted hanging out in Chicago.

The former couple was photographed together in Chi-Town on Friday, “smiling, hugging, and acting friendly,” according to TMZ. Despite what it may look like, the reunion wasn’t a romantic one.

“They are only friends,” a rep for Kehlani tells TMZ. “Not back together. Things ended bad and they hadn’t had an opportunity to see each other … and they wanted to meet up face to face and make peace.”

Kyrie and Kehlani had a highly-publicized breakup earlier this year. Following their separation, the singer was photographed in bed with PARTYNEXTDOOR, causing some to think she cheated on the NBA star.

Following this, Kehlani tried to take her life in an apparent suicide attempt, one that she’s been open about. She has also since dedicated time and energy to the suicide awareness cause.

After hearing about Kehlani’s suicide attempt, Irving responded via Twitter. “I do not justify the picture or what [PARTYNEXTDOOR] did to try and spark all of this nonsense that could have been avoided, but me and Kehlani were not dating when the picture came out,” tweeted Irving. “It’s unfortunate that it’s received so much attention, but its become bigger because of a post that was misunderstood. Nothing but love and compassion over this way for her and her family.”

“Congratulations,” she wrote. “The most humble person I’ve ever met. @kyrieirving I love u!”

Kyrie and Kehlani back together? Spotted in Chicago ? pic.twitter.com/hgdxV1NNi8