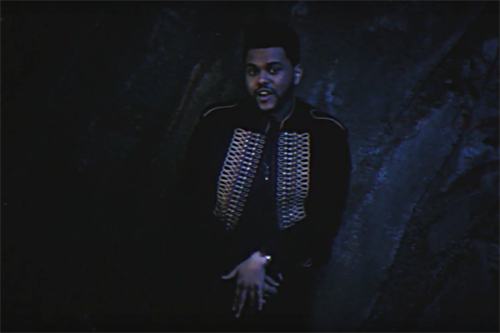 The Weeknd is on his retro sci-fi ish with the brand new video for his Daft Punk assisted hit single “I Feel It Coming.”

The Starboy travels to an intergalactic fantasy world in the Warren Fu-directed visuals, which carry a’80s theme with VHS effects.  Performing the funky track on a rocky planet, Abel dances to the groove with some slick moves before his model love interest appears before him. However, a solar eclipse turns everything dark and turns his woman to stone. As Abel attempts to capture a snake who roams around them, he’s frozen in time as well.

In the end, The Robots show up in the midst of a snowstorm, they look down at something that appears to be buried. A pink neon glow shines through the snow and the “Starboy” theme plays.

The Weeknd is currently on his “Starboy: Legend of the Fall Tour” through Europe with Bryson Tiller and Lil Uzi Vert. The North American leg with Rae Sremmurd, 6LACK, and Belly kicks off April 25 in Vancouver.

Check out the video for “I Feel It Coming” below.