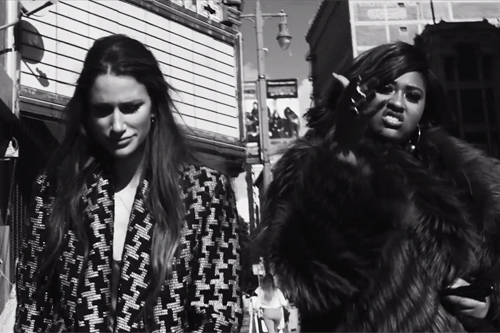 Emerging jazz/soul singer Niia released her debut album I today (May 5), and to accompany the project she has unveiled a video for the album’s surprise duet, “Sideline” featuring Jazmine Sullivan.

In the black-and-white visuals, directed by Sasha Samsonova, the two woman share a similar problem. At first, we assume Sullivan is the “other woman,” but as things unfold it’s unclear who is really the “other.”

Niia explained to The FADER, that the song is about “two very different women dealing with the same problem.” She said Jazmine was the only choice for this duet because she’s just so great. “If I was ever going to lose to another woman, I’d want it to be a strong, incredibly talented, beautiful woman,” Niia said. “Jazmine Sullivan is that woman.”

Sullivan complimented Niia’s “hauntingly beautiful tone,” and added that once she heard the lyrics, she was sold on the song. “Anywhere there’s authenticity and drama I’m all in,” Sullivan said.

Watch the new video below, and stream Niia’s album via Spotify.