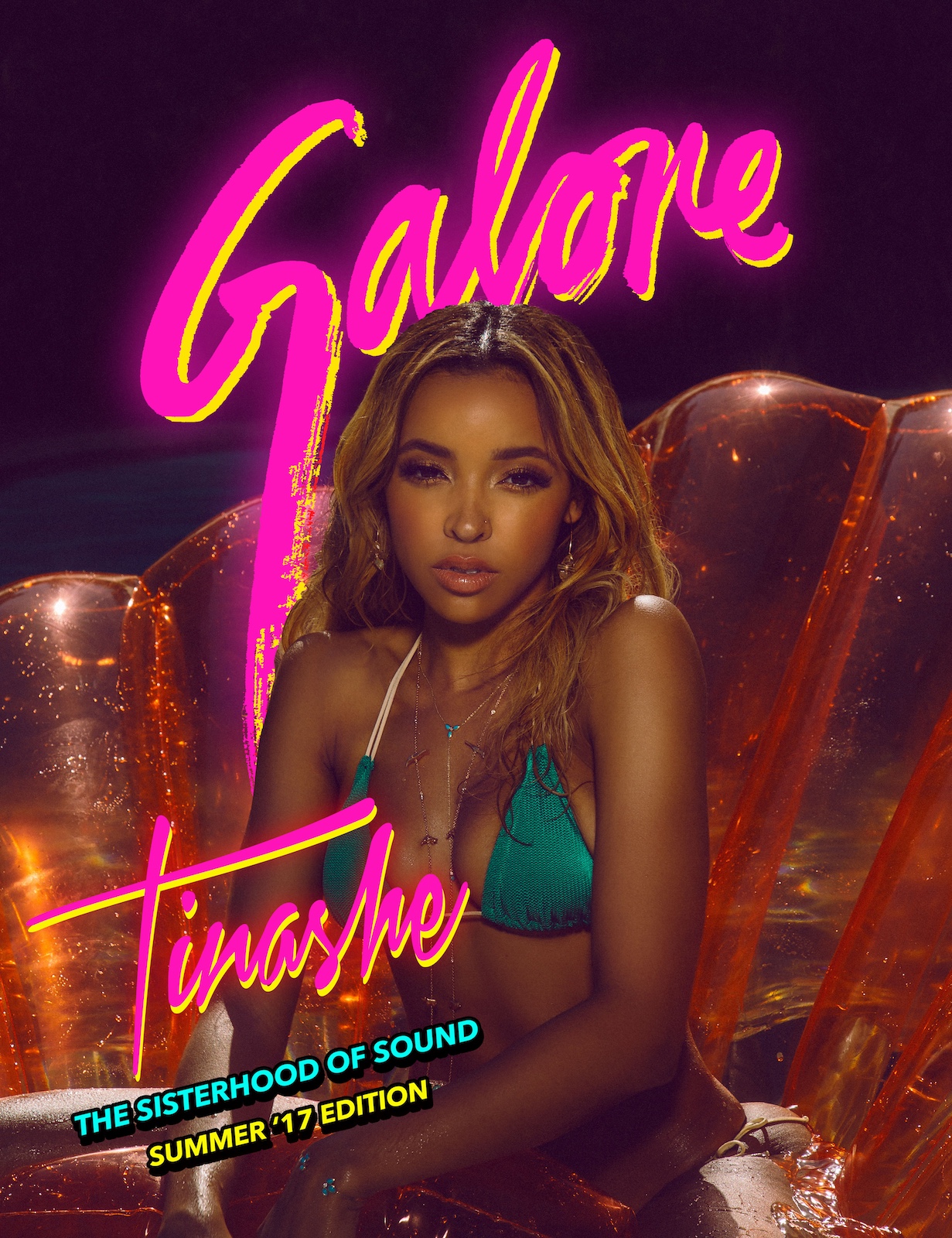 As we just enter August, Galore magazine has us sweating with their hot new summer 17 issue featuring cover star Tinashe.

The R&B/pop artist graces the mags latest edition, the ‘Sisterhood of Sound’ issue, wearing super sexy summer looks. In her interview, the “Flame” singer talks sexism in the studio, what it’s like to date while famous, where she gets her signature style, advice from Madonna, and more.

In her photoshoot with Prince and Jacob, Tinashe models some trendy, sexy swimwear by Gigi Hadid x Tommy Hilfiger, Haus of Pink Lemonaid, Lolli Swim, Bunny Holiday, and more. She straddles a shell shaped pool float, stands on the edge of the pool overlooking Los Angeles, and lounges in a Ferrari.

Check out excerpts from her interview and pics from the smoking hot photoshoot below.

ON DATING IN HOLLYWOOD: “I guess I don’t necessarily try to be part of the Hollywood scene. You can easily avoid it or easily make yourself part of it, as far as going to the Hollywood hot spots where you know TMZ will be and you know people will photograph you. It’s kind of a decision you make. You can go to different parts of the city and those people aren’t there.

As far as my personal and dating life, it’s relatively nonexistent. Half because I really don’t have the time and don’t make it a priority. Whenever I do get involved with someone, I don’t wanna just sabotage it right away [by going public]. Like it’s gotta be a real thing for me if I’m gonna get involved.”

ON BEING IN A PUBLIC RELATIONSHIP: “I think with a lot of these industry relationships, it’s beneficial for everyone involved to be public because it is such a huge talking point. So I don’t knock people who are public, because I understand it. There is a lot of press associated with being in a public relationship. But I don’t necessarily try to do it. That’s not like my goal but I understand where they’re coming from.”

ON SEXISM IN THE INDUSTRY: “The most blatant sexism I received was more toward the beginning of my career when people thought of me more as a cute girl who got a deal who didn’t necessarily earn her place here. It was an attitude of, “okay, this girl is hot,” and a lot of people just really objectifying me in studio situations when I’m trying to make a song with a producer or writer.

Especially because I was only like 18, 19 at the time, there were a lot of older guys seemingly more interested in the physical aspect or the sexual aspect of potentially working with me rather than making a good song. Which is obviously frustrating and a little bit upsetting. But as I gained respect as a songwriter, [and] as someone who deserves to be here, it happens to me less. At least to my face.”

ADVICE FROM MADONNA: “Recently I met Madonna at an Alexander Wang party and she told me, ‘Don’t ever compare yourself to anyone in the industry,’ which I think is amazing advice coming from Madonna. Because it’s so true that as a woman there is so much competition placed on us, that we start to think about ourselves in that way and we start to judge ourselves and really pit ourselves against other female artists, because that’s what society will do to us. She said, ‘Don’t compare yourself to any other artist and don’t take shit from anybody.’ And I was like, ‘Yes, Madonna, I won’t.'”