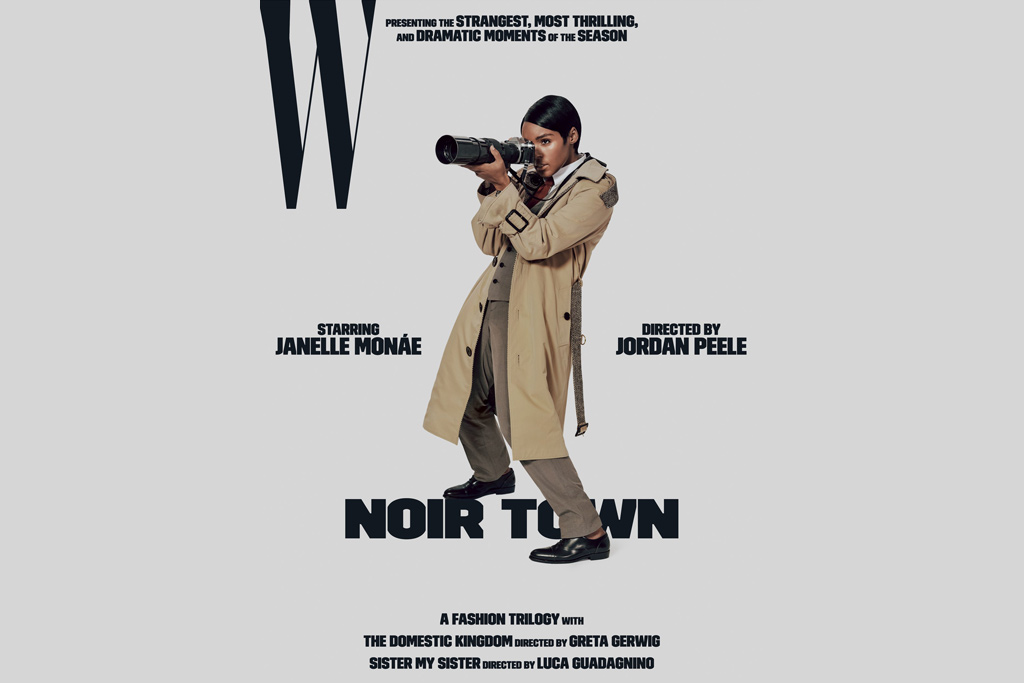 Janelle Monáe is prepping for a major comeback this year having just recently announced her new album and film Dirty Computer. Prior to releasing any new music, the singer/actress plays a fantasy role in a special feature for ‘W Magazine‘ directed by Get Out‘s Jordan Peele.

Titled “Noir Town,” Monáe portrays a private investigator in the Alfred Hitchcock themed photo shoot. Standing in a clock tower taking photographs of a parade, Janelle is searching for clues to a murder. As the detective stares through her camera lens, she begins to realize that one of the bystanders on the ground looks exactly like her. Then she sees another identical face. And another. Suddenly, the sea of potential suspects are visions of herself. Are these women good? Are they evil? And why are these twinlike alter egos haunting her?

“I wanted to create a Hitchcock moment that doesn’t really exist in a Hitchcock film,” explained Jordan Peele. The Oscar-nominated director constructed a scenario that paid homage to the mystery and intrigue of Hitchcock masterpieces like Vertigo and Psycho. Just as Get Out is Peele’s subverted and original take on unsettling classics like Rosemary’s Baby and The Stepford Wives, “Noir Town” replaces Hitchcock’s uniformly white protagonists with a woman of color.

Known for her primarily black and white tuxedo wardrobe, Janelle Monáe wears a collection of brands including Burberry, Giorgio Armani, Valentino, DSquared2, Etro and more. Check out the full photo spread below.

Watch: TV One's 'Unsung' Returns with Silk Episode + Plus Live Performances of "Girl U For Me" & "Lose Control"