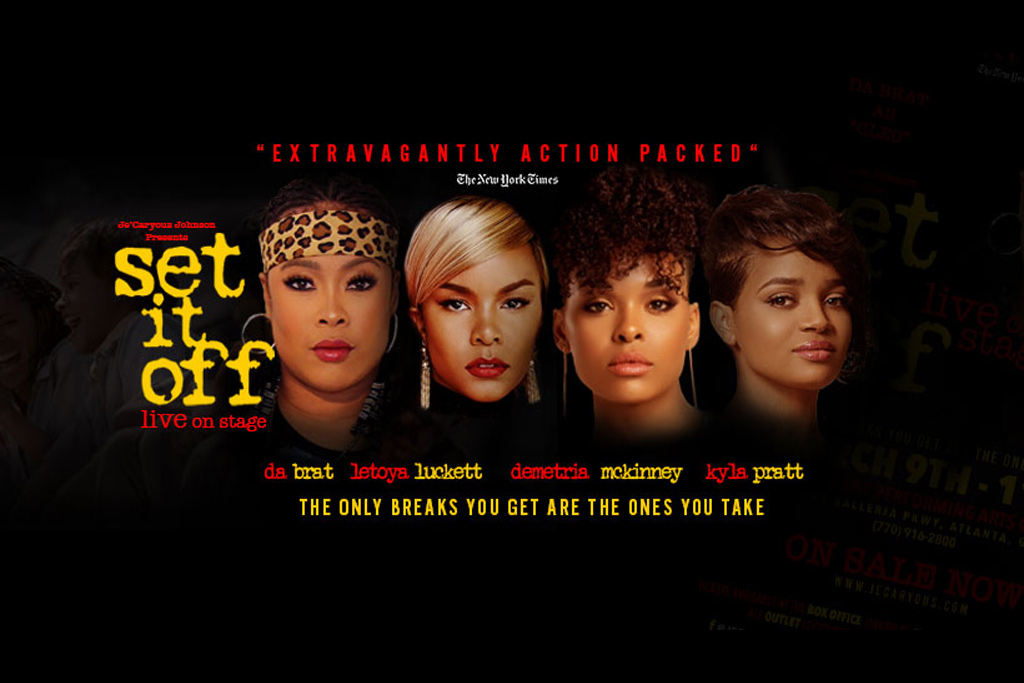 Are you a fan of the ’90s cult classic film Set It Off? Well, now you’ll get a chance to see it again, but this time as a stage play. More than 20 years after the theatrical release, the F. Gary Gray directed action movie is being adapted into a play starring rapper and radio personality Da Brat, actress Kyla Pratt, and R&B songbirds LeToya Luckett and Demetria McKinney.

The film, which follows four female friends living in L.A. who decide to plan and execute a string of bank robberies, originally starred powerhouse actresses Queen Latifah, Jada Pinkett-Smith, Vivica A. Fox, and Kimberly Elise and became a box office success as well as a top favorite among movie fans. Now, 22-years-later, the film will have the chance to touch a new set of fans with its stage adaptation.

Playing the roles of Francesca “Frankie” Sutton (Vivica A. Fox) and Tisean “T.T.” Williams (Kimberly Elise), Luckett and McKinney have both taken to Instagram to show their appreciation for nabbing their on-stage roles.

I’m So excited L❤️ves!! It's official! I have just joined the cast of the stage version of the movie SET IT OFF. That's right one of the hottest movies ever made -SET IT OFF! Unbelievable! You have no idea how incredible this is going to be. But, that's not all – you're going to have me, DaBrat, Kyla Pratt & Demetria McKinney all on the stage together. Doesn't get better than this. This is one ride you guys you can't miss. We are hitting up everywhere – Atlanta, DC, Houston, Chicago, Detroit, St. Louis, LA, Dallas Go to jecaryous.com for all the info and I can't wait to see you soon for SET IT OFF! @jecaryous

#Spillingtea but in a good way! Lol! I have joined the cast of the stage adaptation.of #SetItOff along with @sosobrat @letoyaluckett and @kylapratt !!!! Y'all know the movie was a ride and this will be no different! Go to www.jecaryous.com for more info and we will see you soon! xo! #easy #naturalhair #acting #tour #booked #busy #blessed

The unmatched acting in the 1996 film added to the trajectory of each of its starring cast members careers and with this talented set of women playing the roles on stage, we assume nothing but an applause-worthy outcome.

Set It Off live on stage is written, directed, and produced by Je’Caryous Johnson and joins the likes of Two Can Play That Game, Love Jones and more as the latest ’90s movie-turned-stage play. The show premieres March 9th – 11th in Atlanta, GA. For more details on the multi-city tour and show dates, visit www.jecaryous.com.