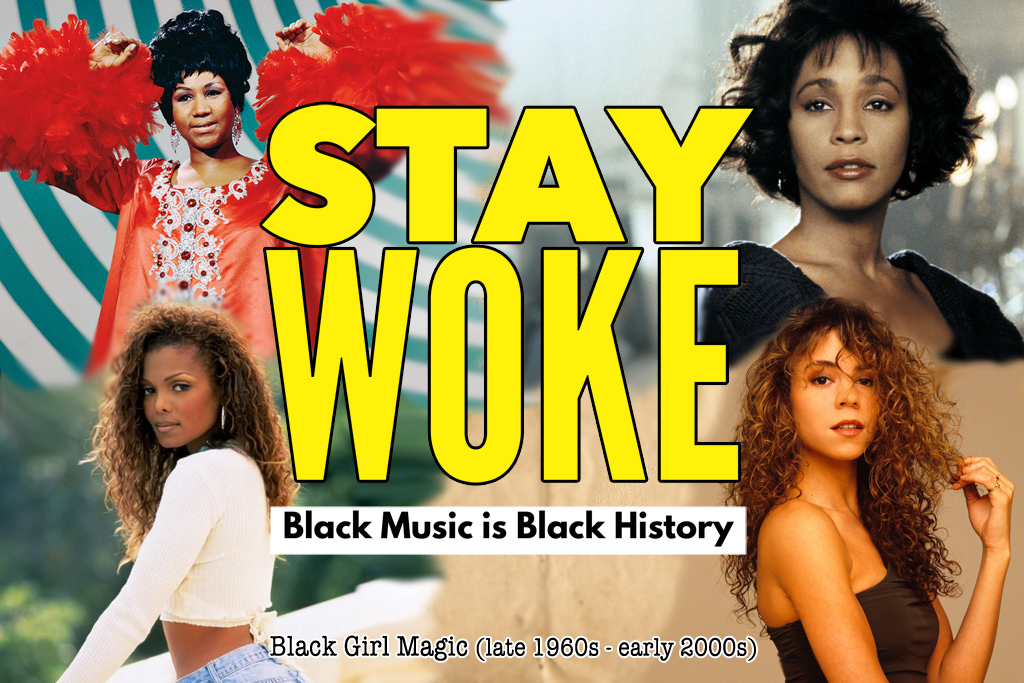 While discussing the importance and history of R&B music thus far it has been pretty male-dominated. Although there were a few casual mentions of female artists before, the focus remained on men, and that was on purpose. The boundaries that were broken and the legendary accomplishments achieved by black women in the music industry while dealing with misogynoir (the intersection of racism and sexism) deserves to be highlighted on its own. We’ll take a look at four legendary women to see just how Black women were able to carry R&B music all the way into the new millennium.

In the 1960s, there weren’t a lot of Black women in R&B music dominating the mainstream pop charts besides The Supremes. That was the case until 1967 when a young singer by the name of Aretha Franklin, signed with Atlantic Records and released the song “I Never Loved A Man (The Way I Love You).” The song went number one on the R&B charts and was a top ten hit on the Billboard Hot 100, peaking at number 9. The song would kick off an illustrious career that is now over 50 years and counting.

Aretha Franklin hit her stride in the late-60s, releasing timeless hits such as: “(You Make Me Feel Like A) Natural Woman,” “Ain’t No Way,” “Chain of Fools,” “I Say A Little Prayer,” and her biggest hit, “Respect.” By the end of the ’60s, Aretha had earned the moniker, “Queen of Soul” and she would live up to it. She continued making hits into the ’70s, most notably, 1973’s “Until You Come Back To Me (That’s What I’m Gonna Do).” The song was a number one hit on the R&B charts and peaked at number three on the Billboard Hot 100 in 1974, which made her the first artist to have a hit song peak at each position from one to ten on the Billboard Hot 100. Only three other artists have reached this feat since. Aretha Franklin is also recognized as one of the most charted female artists in Billboard history with 112 charted Billboard singles including 77 Hot 100 hits, 17 top ten hits and twenty number-one R&B hits. She’s also one of the best selling music artists of all time with over 75 million records sold worldwide as well as one of the most awarded with 18 Grammys. This incredible success was the reason she became the first female performer to be inducted into the Rock and Roll Hall of Fame in 1987. Every woman that came after her, was inspired and influenced by her incredible vocal gifts or success in some way.

Perhaps most obvious is her influence on her “niece” Whitney Houston. Meshing her big voice and gospel melismas (aka runs) with pop and R&B music, Whitney was the clear successor to Aretha Franklin. Whitney burst onto the music scene in 1985 with the release of her self-titled debut album, Whitney Houston, which went on to become the best-selling debut album of all time. The album went diamond in the U.S. (sales of 10+ million) and have worldwide sales exceeding 30 million. The album was the first album by a woman to yield three number 1 hits (“Saving All My Love For You,” “How Will I Know,” and “The Greatest Love of All”) and is one of the best selling, critically acclaimed albums of all time. The success of her music made her the first Black women to receive heavy rotation on MTV and other mainstream media platforms.

Whitney Houston would continue to dominate the music industry in the ’80s and ’90s by becoming the only artist to chart seven consecutive No. 1 songs, having the first album by a woman to debut at No. 1 (her second album, Whitney), becoming the first act (solo or group, male or female) to sell a million albums in a single week with The Bodyguard soundtrack and releasing the best-selling single by a woman in music history with, you guessed it, “I Will Always Love You,” released in 1992. Guinness World Records cited Whitney as the most awarded female act of all time, and she’s also one of the best selling artists of all time with over 200 million records sold worldwide. Also known as “The Voice,” Whitney broke barriers for Black women and brought R&B and soul to pop music in a way that has never been done since. She was one of two Black female artists in the ’80s to lay the blueprint for today’s diva-pop stars.

The other black woman dominating the 1980s was Janet Jackson. Miss Jackson (cause I am nasty), was another one of the first Black women to be in heavy rotation on MTV and other mainstream media platforms, setting the standard for female entertainers with her crisp choreography, storytelling, props, costumes and inventive imagery. While her 1986 album, Control, was a major success it was her next album 1989’s Rhythm Nation 1814, that would cement her legacy as an icon and break the mold. The album was socially conscious (exploring topics of racism, drugs, poverty, etc.) and sonically diverse with infectious pop hooks becoming the first and only album to have seven songs peak within the Top 5 Billboard Hot 100 (Michael hasn’t even done that). It is also the only album to produce No. 1 hits in three separate calendar years (1989 – “Miss You Much,” 1990 – “Escapade” and “Black Cat,” and 1991 – “Love Will Never Do (Without You)”). The album was a huge critical success, being nominated for nine Grammy awards. Janet became the first woman nominated for Producer of the Year, an area where women are sorely underrepresented, and is the only artist in history to receive Grammy nominations spanning five genres (Pop, R&B, Dance, Rock, and Hip-Hop). Her accompanying tour, “The Rhythm Nation Tour,” became the most successful debut concert tour in history, establishing Janet’s status as not only a legendary artist but an iconic entertainer. This album single-handedly broke barriers encouraging women to explore different music genres, take more creative control of their music and speak on social/political issues. She accomplished all of these accolades and made history as a R&B artist, showing that artistic expression within the genre isn’t one dimensional.

Janet Jackson would continue to dominate the ’90s music scene. Her record-breaking multi-million dollar recording contracts made her, at one time, the highest paid artist in the music industry and showed her business acumen. She holds the record for most consecutive top ten Billboard Hot 100 hits, with 18, by a female artist and is recognized as one of the best selling artists of all time with worldwide sales exceeding 150 million. By the end of the 1990s, she was named by Billboard the second most successful recording artist of the decade.

So after reading some of her stats and accomplishments in the 1990s (there’s a lot more) who beat Janet as the most successful artist of the decade? It was none other than Mariah Carey. Through the ’90s, Mariah Carey had at least one No. 1 song every year. Every single year. From 1990 all the way to 2000. Something the industry has never seen. She reached her commercial peak in the mid-1990s with 1995’s Daydream album. It was her second album to be certified diamond, making her one of the very few artists to have multiple diamond albums and would break numerous records. The album had three No. 1 singles including: “Fantasy” – the first single by a female artist to debut at No. 1; “One Sweet Day” – the longest running No. 1 single ever at 16 weeks, a record it still holds; and “Always Be My Baby” – her 11th No.1 single which tied her with Madonna and Whitney for most No.1 singles by a female artist at the time. While all three songs are legendary and among her best work ever, it was the song “Fantasy” that had the biggest impact on R&B/pop music. The remix to “Fantasy” famously featured the rapper O.D.B., a risky and unexpected collaboration at the time. Although we now look at Mariah Carey as a popular R&B artist, in the mid ’90s she was mostly seen as a pop artist, more Celine Dion than Mary J. Blige at the time. The groundbreaking collaboration is responsible for merging pop music and Hip-Hop together, inspiring an entire generation of artists sonically including Britney Spears, Christina Aguilera, Beyoncé, Katy Perry, Rihanna, Ariana Grande and many more. R&B, pop and Hip-Hop are now inextricably linked musically and we can hear it all over radio ’til this very day and it’s in large part thanks to this woman.

1967 – Aretha Franklin releases her first hit “Never Loved A Man (The Way I Love You).”

1985 – Whitney Houston releases her debut album – the most successful debut album in history.

1992 – Whitney Houston releases “I Will Always Love You” – the biggest selling single by a female artist in history.

1999 – Mariah Carey releases “Heartbreaker” – her 14th No. 1 single and made history as making Mariah the first and only artist to have at least one No.1 song every year of a decade.

By the ’90s, black men began to take a back seat to black women in regards to commercial and critical success in the R&B genre. The most successful acts of the decade were black female artists who helped mold the genre and pushed the sound forward into a different direction inspiring and influencing the generations to come. The early 2000s mark the end of the dominance of Black women in R&B as Mariah, Janet and Whitney would go through adversity, commercial decline and their own personal issues. Since then, we haven’t seen a large group of Black women run the music industry. Also, by the turn of the century teen pop, boy bands and Hip-Hop music began to overtake and surpass R&B’s supremacy. In the last segment we will analyze the modern era of R&B, the last glimpses of its mainstream appeal and its influence on political/social movements and commentary today.

Exclusive: Adrian Daniel Performs In Paris On The “FLAWD Tour”