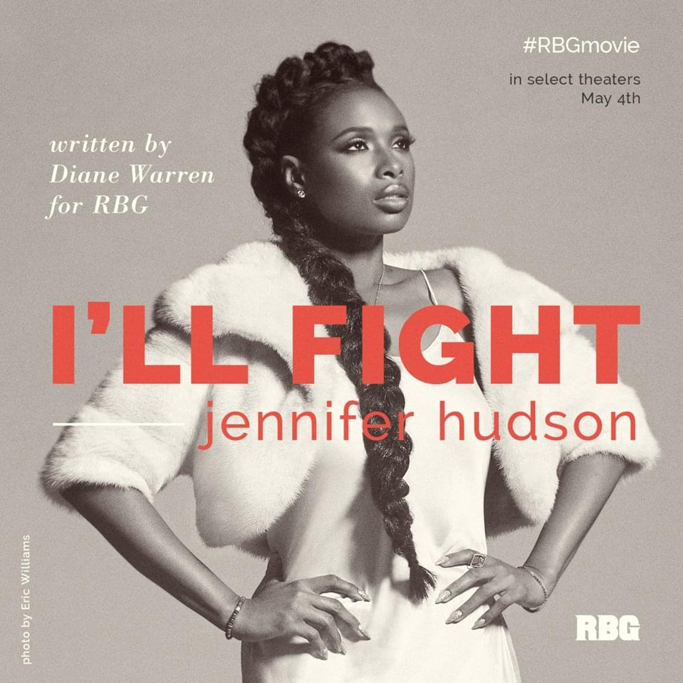 Powerhouse vocalist Jennifer Hudson unleashes a brand new song “I’ll Fight” today. The singer’s ability to make commanding, transformative anthems is undeniable with each release, and the latest is no different.

“Last year, I wrote, ‘Stand Up For Something’ for Marshall, the film about U.S. Supreme Court Justice Thurgood Marshall. Now, I have written a song, ‘I’ll Fight,’ for another legendary Supreme Court Justice, Ruth Bader Ginsburg,” says Warren. “It has been an honor to write a song about such a badass, inspiring, and iconic woman. And, it’s a dream-come-true to have my friend, Jennifer Hudson, one of the greatest voices on the planet, sing this song.”d

RBG is told through the voices of Ginsburg’s friends, former clients and colleagues, and includes interviews with historic figures and her family, including Gloria Steinem, Eugene Scalia, NPR’s Nina Totenberg, Sen. Orrin Hatch (R-UT), Lilly Ledbetter, and others. In recent years, Justice Ginsburg, now approaching her 25th year of service on the U.S. Supreme Court in the summer of 2018, has also become an intergenerational pop culture icon. The film includes interviews with Justice Ginsburg that are interwoven with never-before-seen home movies, images, and scenes from her career achievements and her private life. Throughout the film, there is an exploration of her decades-long romance with her husband, the late Martin Ginsburg, whom she credits with making her contributions to American life possible.