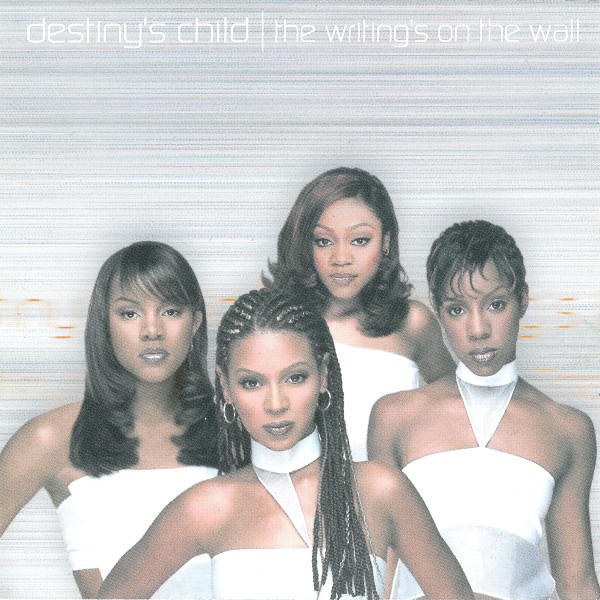 It was the summer of 1999. After the mammoth success of TLC’s “No Scrubs,” producer Shakespeare and writer Kandi Burris cooked up another female anthem that would dominate the latter part of the year: the single “Bills, Bills, Bills.” The song’s tight harmonies and catchy hook made it an instant smash,  becoming the Destiny’s Child‘s first number one song on the Billboard Hot 100. Though not their debut, the group found that the stars truly aligned with the release of “The Writing’s on the Wall” — even with the hiccups that they endured throughout the promotion of the album.

Growing up in church, my exposure to secular music was limited, but I vividly remember my aunt coming to visit the summer this album was released because she played it in the car as we drove around the city. In awe of what I was hearing, I asked if I could borrow the album and now, 20 years later, it still hasn’t been returned.

I’d never heard anything like it. From the no nonsense attitude of  “Hey Ladies” to the cautionary tale of growing up too fast on “Sweet Sixteen,” this album was the soundtrack for young millennials growing up in a new wave of female independence. Lyrically, the album tackled themes of love, life, heartbreak, and independence with a level of honesty that was generally reserved for the safe space of the local hair salon. Therefore, it was quite fitting that the video for “Bills, Bills, Bills” takes place in a hair salon paying homage to Beyonce’s mother’s (Tina Knowles-Lawson) successful hair salon where the group would often perform for customers.

Recorded in only 3 weeks, the highly celebrated piece featured many tracks co-written by the group’s members, including the popular second single, “Bug-a-Boo.” Throughout the album, each track was introduced by a “relationship commandment,” which together revealed what “The Writing’s on the Wall” were. And if done in the current social media generation, each one of the commandments would be accompanied by the perfect meme.

Serving as the follow up to to their platinum success, self-titled debut album, “TWOTW” is the album that propelled Destiny’s Child to true superstardom. Like all successful groups and powerful albums (remember TLC’s “CrazySexyCool” album?), however, the game changing project did not come without drama.

Changing the group’s lineup midway through the promotion for the album, the success of “TWOTW” can arguably be attributed to the public drama surrounding the group just as much as it was the actual music.

The video for “Say My Name” introduced us to new members Farrah Franklin and Michelle Williams and though confused fans for a bit, was another number one hit for the group. According to original members LeToya Luckett and Latavia Roberson, however, it was only when they saw the video for “Say My Name” — which featured the two new members (Farrah Franklin would be dismissed shortly after) — that they learned they were no longer in the group. And while this type of turmoil would normally be a sign it was over for most groups (3LW, Fifth Harmony, and more), the public discourse only boosted the group’s profile largely because it was backed by exceptional music.

Aside from the successful singles that were release, the album hosted dynamic songs such as the opening track “So Good.” A fiery clap back to haters, the song brought a level of confidence and bravado that was often only seen in the hip-hop world. The quartet blasted fake friends and detractors alike with lines like “This is for the haters that said we wouldn’t make it, now we doing platinum and now you can’t take it.” Even the way Beyoncé elongated the “I’m doing so so so so good” phrase in the bridge felt as if she was antagonizing a hater by getting right up in their face and delivering the musical equivalent of a smack in the same area.

On the criminally underrated “She Can’t Love You,” the ladies shade their ex’s new girlfriend (“I saw your new girlfriend the other day and expected for her to be so much more than she was”). Once the chorus arrives, however, they are convinced their old flames are simply wasting their time and should take them back because “there’s no way her love’s as good as mine.”

The most controversial (and appreciated) record on this album though, is the Missy Elliott penned “Confessions.” Long before Rihanna was singing about being “Unfaithful,” Destiny’s Child flipped the narrative and detailed what it was like for a female to be the transgressor in the relationship. And while Beyoncé narrates the verses, Kelly provides a welcomed change by handling lead vocals on the hook of the song. Although often compared to TLC’s “Creep” — which took a “two can play that game approach” to infidelity — “Confessions” makes you feel the level of remorse in the tone of their voices and the transparency in the lyrics. After clearing their conscious and asking their partners “What you feel about that?,” Destiny’s Child left listeners feeling as if they committed the crime themselves.

With the fourth and final single “Jumpin’ Jumpin” — which was co-produced by Beyoncé — Destiny’s Child earned another top five hit, helping to catapult “The Writing’s on the Wall” to become an astounding success. The album went on to be certified 8x platinum in the United States alone and was nominated for six Grammy awards, picking up two for “Say My Name” (Best R&B Song and Best  R&B Performance by a Duo or Group). The album also ranked number 61 on NPR’s prestigious “The 150 Greatest Albums Made by Women” list.

Firmly planting themselves in line to become one of the greatest groups to exist, this sophomore effort from Destiny’s Child is what showcased the star power that each one of the talented girls already possessed.

Share your favorite tracks from this classic album below!