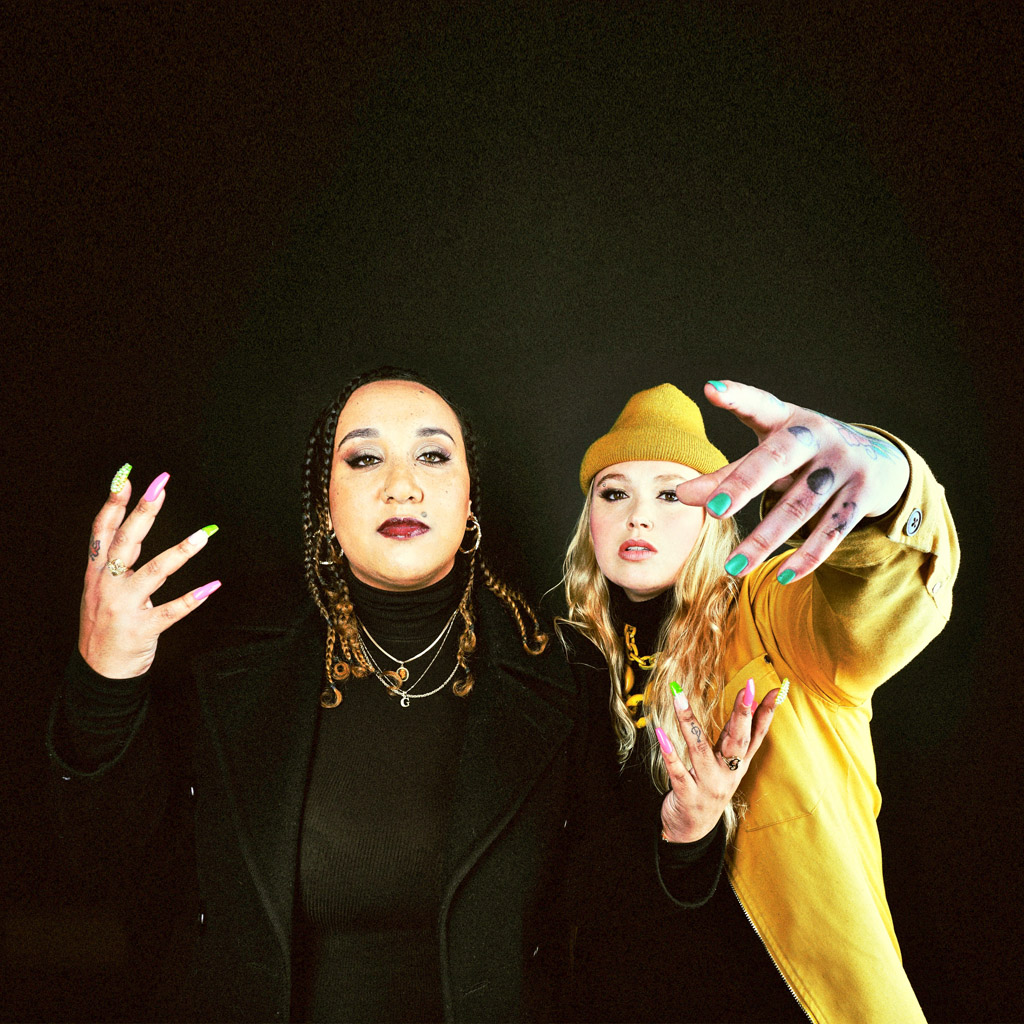 Critically acclaimed duo Blimes and Gab cleanse you with sublime rhymes about life on their debut album, Talk About It. It features production from Sean C & LV, Elijah Grae, Louis Bartolini and more. From the moment the opening track, “Baptism,” cues they slay the mic like warriors. Seattle emcee Gabrielle “Gifted Gab” Kadushin, 29, and San Francisco-bred spitter Samantha “Blimes Brixton” McDonald, 31 are your badass aunties who are dropping bars while securing the bag.

After linking up, in 2017, on social media, their debut single “Come Correct” garnered 10 million views. Along with their eargasmic sound, their quirky Instagram skits make them a fan favorite. Many of whom they consider family.

“We exert big auntie energy! Gab is the give it to you straight, no patience for bullshit auntie,” explains Blimes via a phone chat with ThisisRnB’s Rocki. “And I’m the gay auntie encouraging you to follow your dreams, take you on some natural excursion in the wilderness.”

While they are dope individually, together they are indomitable.  Gab’s father is white (Lithuanian) and her mom is Black/Native American, which meant a strict upbringing of church more than once a week. Her musical acumen was honed by singing in the choir, composing melodies and playing instruments since the age of 7. Yet, she was also “that kid that was sneaking and listening to Word of Mouth [Ludacris] when it first dropped, in the back of the church.”

Meanwhile, Blimes was immersed in the secular soundscape produced by a jazz musician granddad and blues musician, father. To describe them as female hip-hop artists is insufficient because as Gab says they “rap circles round you Urkels.” They also harmonize throughout the album.

We can anticipate watching more of their antics on their upcoming reality show directed by cultural icon, Nelson George. It will document the duo’s complementary chemistry as they journey through hip-hop. For every boss woman in your life who never apologizes for the reverb of her footsteps; for every powerful female who dares to change the game; this is Blimes and Gab.

Check out their thoughts on their placement on this past season of HBO’s “Insecure,” staying true to their brand, creating Talk About It and more.

TIRNB: Okay, it’s obvious that Gab comes from Gabrielle. Blimes, how did you go from Samantha to Blimes?

Blimes: It all started on the schoolyard when I was 12. I used to battle rap. I was reading Harry Potter and I was heavily listening to UK hip-hop. So I was listening to Little Rascal and The Streets and Lady Sovereign and stuff. I was obsessed with British slang and the term “blimey.” So, my rap name on the schoolyard was Blimey because I would use a British accent. When I was in my mid-20s I wanted to get away from battle rap; I decided to pivot, so I just switched my name from Blimey to Blimes.

TIRNB: Although it’s 2020, women in hip-hop still deal with issues of misogyny, and sexism. Talk about how you have stuck to who you are by being authentic and not buying into the mainstream pressure of oversexualizing yourselves.

Gab: Trying to step outside of myself to be hella over-sexualized will come across as not natural, at all. Not that I’m not feminine or can’t get sexy, but that’s just not my selling point. And for me personally, it’s just more rewarding.  When someone’s not being themselves, it’s very f****** easy to tell. So that’s not at all the vibe or the message I’m trying to put across. Just being yourself, and dressing how you dress, and talking how you talk, takes little effort. You don’t have to think about it cause you’re just doing you.

Blimes: I definitely, 100% agree with everything Gab said. It’s just easier to be authentic. It takes less effort than being fake. But to be comfortable in that place for me, took some time. I didn’t know if people wanted to see that and hear that; the vehicle for that was the internet. Once I became fully comfortable with not having to succumb to the societal pressures of what it means to be feminine, once I became comfortable with forming my own mold for that, I saw my fan base engage on a way higher level because they could taste the authenticity. And that’s inspiring to a lot of people because a lot of people just want to be loved for who they are.

It was a journey, it took some trial and error and it took some getting comfortable with that. But what does help is looking around at other people who are being themselves and successful at it. So I hope that we get to give that gift to somebody else who’s struggling to find their image and to feel confident in themselves and empowered that you can do it and people will love you for who you are. That’s a beautiful thing.

TIRNB: Blimes, can you elaborate on the trial and error since you’re openly gay.  So is that part of what you meant by it being a journey for you?

Blimes: Not necessarily with my sexuality, but just with my femininity because I was raised in San Francisco and there have been gay role models and gay icons around me my whole life. I’ve been comfortable with my sexuality since I was 12. I came out when I was 12 and I’ve been comfortable with it since then because I had people in my community that were striving and were living an out life, openly gay. Being exposed to that from a young age really saved me from what could have been torturous teenage years and suicidal thoughts.

TIRNB: You both have been grinding for a while, but you’re still relatively new to mainstream fame. “Feelin’ It” was featured on “Insecure” —  which to me, was the best season thus far. What was that like for you?

Blimes: It’s a huge honor to be on “Insecure” because I’ve watched it since its inception phase as just a web series on YouTube. … huge honor, all the people that showered us with congratulations, that all felt amazing.

But because of the industry’s resilience to overnight success, you have to like really show people things over and over and over again, to become a household name. We have to vie for our space in the mainstream. We have seen many big opportunities come into our path, so we’ve taken [them] and it’s just a matter of how many of those opportunities can you stack up so that people start to actually notice and actually put your name in their mouth seriously. “Insecure” was a huge, huge stepping stone. However, because we know what this industry is like, we know not to get ahead of ourselves in being like, we made it.

TIRNB: Speaking of TV shows, you are working on your own, directed by the legendary Nelson George. You are blessed to connect with some heavy hitters. What’s the name of the show?

Gab: We don’t have a name just yet. We have some ideas. But we definitely are blessed and we just always happen to be at the right place at the right time meeting the right people. People are drawn to us individually and us together. But all the opportunities and things that have happened, from Blimes linking up with Method Man to Nelson George, have happened just off the strength. None of these things were paid for. None of it was like a business type thing. It was literally, “I like you, I respect what you do. Let’s do what we’re doing.”

TIRNB: So let’s get back to the album. I’m loving “My Way” with Bahamadia. Both of you already have solo projects, so what was that process like doing an album together? What are some of your favorite tracks and moments?

Blimes: When “Come Correct” came out that opened our conversations up with a lot of legends. It was an amazing blessing that video made it onto Facebook where it went viral. So many legends hit us up. … Rah Digga was in the DM, De La Soul and Bahamadia. What I tried to pray for and still do pray for is to be respected in this industry, not to be famous in this industry, but to be respected by the people that I respect in this industry. And when that song came out and all these OGs that I listened to, that shaped my narrative of what hip hop is; when they hit us up, I was like, thank God. It was a huge relief. Thank God that so many people still believe in lyricism.

Bahamadia’s through and through; she, and I chopped it up about spiritual shit. Her and Gab chopped it up about all hip-hop shit. It felt very familiar to be in the studio with her. So definitely my favorite record on the album was “My Way.” And then the other one is “Shelly.”

Gab: Ooh, my favorite track, definitely the Bahamadia one. We were all in the studio together and then afterwards we went and got tacos. So it was very much a dope experience. What is my other favorite song? I mean, definitely the “Hot Damn” remix. I could say that I have a song with Method Man, so that’s great.

But it’s just crazy. All the features that we have on the album are literally all family. From Jay Park to Method Man, it’s all hella love and no phone-ins. None of the industry rap shit, this is really people that we can text.

Talk About It, available now on all digital streaming platforms via The Orchard is executive produced by Adrian Miller, it includes cameos from Method Man, Iamsu!, Bahamadia, and Jay Park. It also features previously released standout singles “Un Deux Trois,” “Magic” ft. Iamsu!, “Shellys (It’s Chill),”  and “Feelin It.”  Add it to your playlist, pronto.