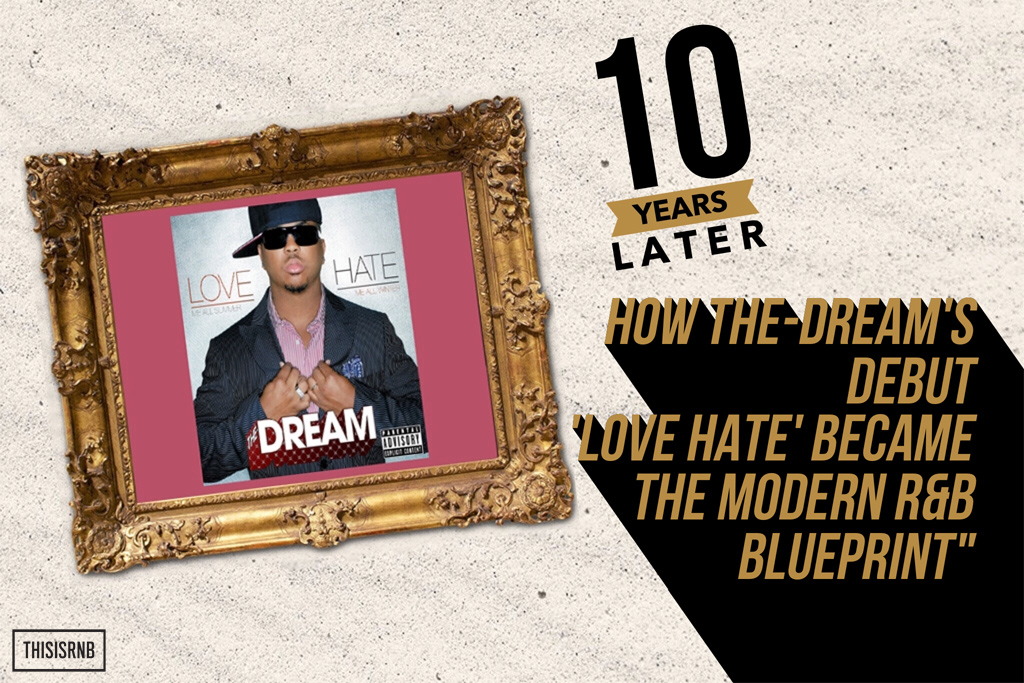 In this new era of digital music, we’ve all heard the depressing stories of on-demand streaming revenues that amount to roughly a pair of Jordan Brand sneakers. Luckily for Terius “The-Dream” Nash, he owned the digital-download era, seemingly the last period in history where people actually paid for music.

Justin Bieber’s “Baby” written by The-Dream and his partner Tricky Stewart has sold over four million digital copies (upgraded to 12x platinum in 2013 with the introduction of streaming to RIAA certifications). He co-wrote Beyoncé’s “Single Ladies,” a song with such cultural impact that it helped propel Queen Bey into her current realm of, well, Beyoncé-dom — where she is arguably the greatest pop star alive. Since then he’s been a fixture on albums with music’s elite, most recently lending lyrics (and sometimes vocals) to Beyoncé’s Lemonade, JAY-Z’s 4:44, and Kanye West’s The Life of Pablo, all contributions which have no doubt placed Nash in the upper echelon of songwriters and quite frankly, a different tax bracket.

But Nash’s wealth isn’t solely measured by the amount of dollar signs he’s accumulated over the last decade, he’s attained a wealthy status in the music industry. Clout, as it’s now referred to. Influence. The-Dream’s body of work as a producer and songwriter extends across a wide spectrum of genres. From working with Kanye West and JAY-Z on Watch The Throne to co-producing an entire album for the iconic Mariah Carey, and even providing a one-off attempt to push the already over-saturated Kim Kardashian into the world of music. But as lucrative as those previous accolades are, the true monument of his career still remains as the delivery of his debut album, LOVE HATE aka Love Me All Summer / Hate Me All Winter.

When Love Hate was released ten years ago, no one was aware of the long-term impact the album would have on R&B music. It was quietly tucked away as a late year release in 2007 after a very successful year of albums, and it flourished despite it. Things wouldn’t be immediately clear when the 12-track project hit stores, but Love Hate would become a genre-shifting album and lay the foundation for R&B to come in the 2010s decade.

Part of Love Hate’s allure was based on the timing it arrived. Knee deep into 2007, R&B hooks were either soaked in T-Pain’s autotune filters or sprinkled with Stargate’s folky, pop confection. The year’s biggest song according to Billboard, Beyoncé’s “Irreplaceable,” featured all-too familiar structures to other Top 20 hits from Rihanna, Chris Brown, and Jordin Sparks. But as much success as those songs acquired, you could feel that the genre was beginning its transition into a new phase as we approached the start of a new decade. It was R&B with less subtlety, and more raw confrontations on love, sex, and infidelity. Love Hate featured less ideas of hopeless romanticism and more hedonistic themes. While in 2007, Trey Songz was peeking his head around corners singing the hopeful “Can’t Help But Wait,” Dream already wrangled his dame and had her singing “fuck that ni**a” on the boastful “I Luv Your Girl.” Tricky Stewart and Los Da Mystro’s retro-futuristic production was the perfect backdrop to the album, but Love Hate‘s rawness was the album’s feature presentation — a rawness he would attribute to the album being recorded in only nine days.

The playboy antics of Dream are on full display through the album, told through seamless and precise transitions as he weaves through the Prince-inspired “Fast Car” and “Purple Kisses” into a spacey, chopped and screwed “She Needs My Love” or the aggressively-pounding, braggadocious “Ditch That.” Songs like “Playing in Her Hair” and “Purple Kisses” felt like an ode to a prior era, but with a semblance of originality that only Dream could evoke through his own production style. Terius volleying “ella’s” and “ayy’s” throughout the tracklisting provided a new sonic foundation for music, and become a signature staple in his own writing/producing style.

Love Hate was released on December 11, 2007. It featured his fun, introductory summer single “Shawty Is Da Sh*t,” which landed Dream his first Top 20 hit as a solo artist. It was followed by the lewd melodies of the 12 Play-inspired “Falsetto,” which joined the aforementioned single in it’s gold-certified status after peaking at #3 on the R&B/Hip Hop chart. The final single, “I Luv Your Girl” would follow similar success, peaking at #3 on the R&B/Hip Hop chart — cementing Dream’s ability to be a hitmaker not only for international pop acts, but for himself.

Love Hate was The-Dream’s bridge from songwriter to successful singer-songwriter in the vein of previous acts like Babyface, Stevie Wonder, and R. Kelly, among others. His success over the next calendar year (which included hits for Mary J. Blige, Mariah Carey, and Beyoncé) eventually rolled over into the success of his follow-up, Love vs. Money. By then, the R&B genre would begin to skew from its conventional structure and feel. The genre that depended so much on Hip Hop through the mid-00s would begin evolving with its own sound, and artists would become more vulnerable while also more sexual, applying more hedonistic themes to their music.

Without the inception of Love Hate, it’s hard to imagine a world where Jeremih’s chart-topping “Birthday Sex” gets the same recognition in 2009. Despite different sonics, it’s hard to imagine The Weeknd’s House of Balloons gets the same immediate attention or PARTYNEXTDOOR’s debut project is readily accepted for lewd, unconventional takes on R&B. Ty Dolla $ign to this day credits The-Dream’s Love Hate album as a model for how his albums are constructed, after finally getting to work with him on his latest Beach House 3 LP.

Love Hate debuted at #30 on the Billboard 200 chart a week after its release behind quite a few of his then-peers, but no album released that week would make as strong of a dent in the genre of R&B and urban pop for the following decade. It’s a testament to the fact that influence through incredible music will have a much longer lasting effect than any weekly chart position will.

The-Dream will celebrate the 10th anniversary of his debut with a pair of concerts in Los Angeles and New York, tickets are available.