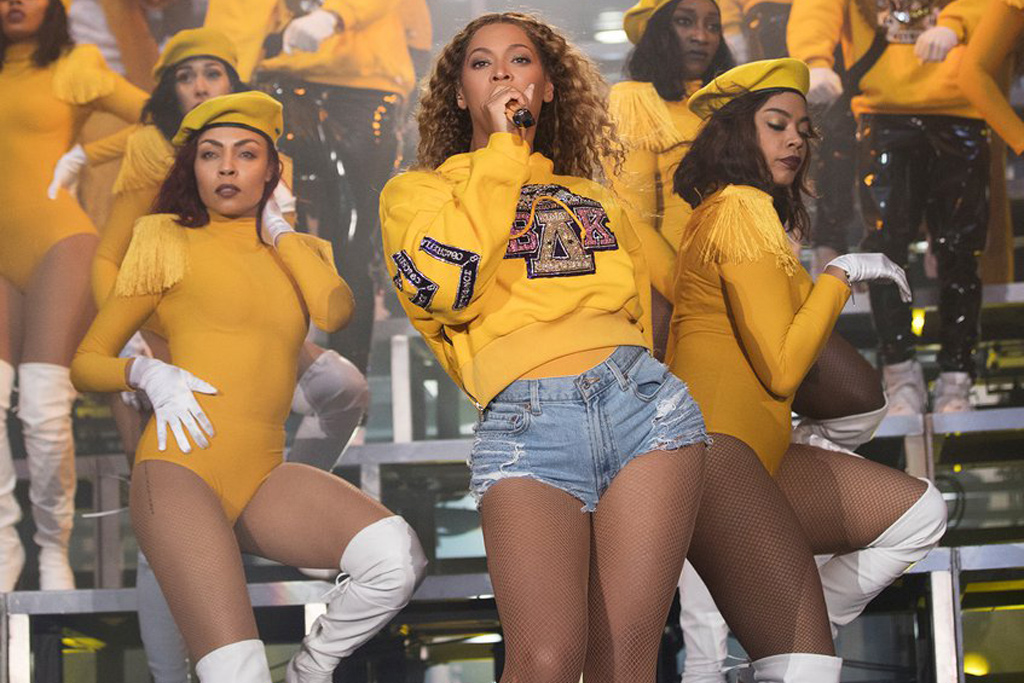 A year after she was originally scheduled to perform, Beyoncé executed the greatest performance Coachella has ever witnessed. Making history as the first black woman to headline the annual festival, Yoncé graced the main stage around 11:25pm PST on Saturday (April 14) and gave the audience and streaming viewers worldwide one of her most awe-inspiring sets for nearly 2 hours.

Opening in a Egyptian styled Balmain outfit with a jewel-covered bodysuit and cape, the global superstar strutted down the catwalk stage with horns blaring. As the cameras cut to the main stage a grand lighting section was lifted to reveal a full-size marching band ensemble and dozens of dancers. Bey then reappeared at the top of the stage’s staircase revealing a HBCU styled crest on her yellow sweatshirt, which she paired with ripped up denim shorts and tassel covered boots. The mommy of three took viewers back to where it started opening with “Crazy In Love,” and then brought everyone full circle following it with Lemonade‘s “Freedom.” The night’s first surprise came with a brief cover of James Weldon Johnson’s “Lift Every Voice and Sing” also known as the Black National Anthem. Then, Beyoncé returned to her latest body of work with another jaw-dropping performance of “Formation.”

Through the whole performance the artistic and creative transitions between her vast discography was one of many highlights. An early example that this was going to be an all-encompassing journey through her catalog was her segue from the aggressive “Sorry” to the smoothed out “Me, Myself and I,” then back to “Sorry” and then the Houston-inspired “Bow Down.”

Addressing her ground-breaking status during her set, Beyoncé exclaimd: “Thank you for allowing me to be the first black woman to headline Coachella…ain’t that ‘bout a bitch.”

The historic performance was married with iconic moments, and she delivered even more with guest appearances from Jay-Z, who took the stage briefly for his verse on “Deja Vu,” and her sister Solange who joined Bey for a playful dance break to “Get Me Bodied.” But, the real guest stars of the night were Kelly Rowland and Michelle Williams, who reunited with Beyoncé for a three-song Destiny’s Child set that included “Lose My Breath,” “Say My Name” and “Soldier.”

Prior to closing with “Love on Top,” Beyoncé addressed the audience about the epic evening. “I was supposed to perform at Coachella before, but I ended up getting pregnant thank God,” explained Bey. “So I had time to dream and dream with two beautiful souls in my belly. I dreamt up this performance and this is everything and more than I dreamt of it being, thank you guys for sharing this with me. I hope y’all enjoyed the show, we worked very hard.”

Beyoncé is set to perform again next week for the second weekend of Coachella on April 21. If you missed it live, watch Beychella below.

The Weeknd Fulfills His Coachella Destiny With Triumphant Headlining Set