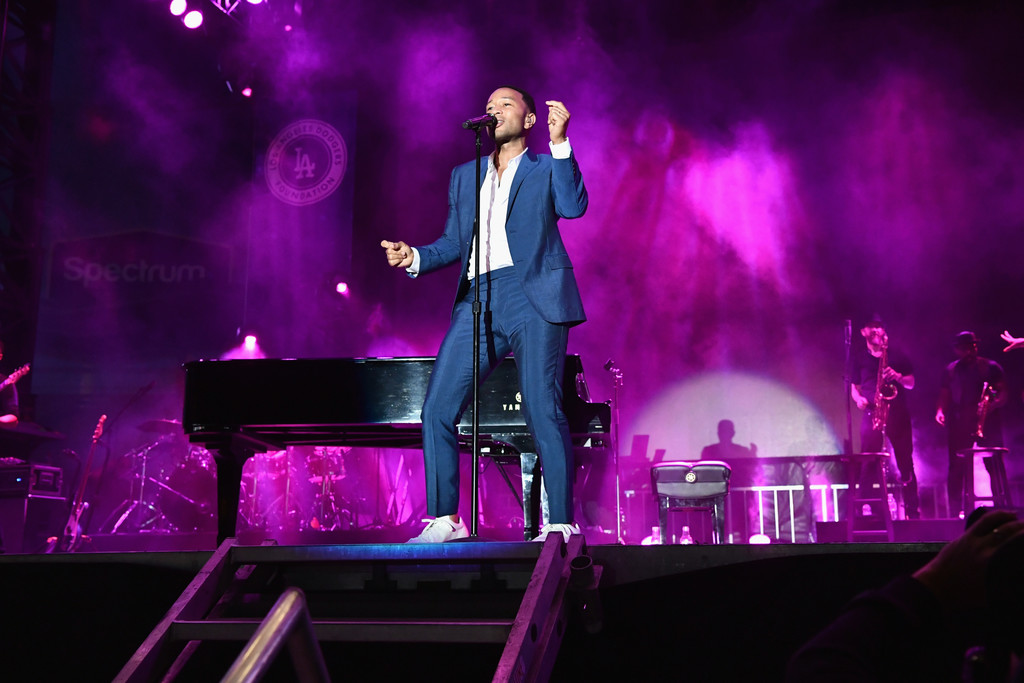 John Legend brought it home for a winning cause on Monday night (June 11). The R&B crooner performed a home run set at Dodger Stadium as part of the Major League Baseball team’s annual Blue Diamond Gala to benefit programs for inner-city kids and more.

Hosted by Arsenio Hall and George Lopez, the event helped raise more than $100,000 from a live-action auction alone to help support communities in Southern California.

For more than an hour, Legend rocked a special stage set up in the middle of center field with rousing performances of “All of Me,” “I Know Better,” “Penthouse Floor,” “A Good Night” and covers of Curtis Mayfield’s “Superfly,” Elton John’s “Don’t Let the Sun Go Down Me” and a jaw-dropping acoustic version of Billy Idol’s “Dancing in the Dark.”

Los Angeles Dodgers Foundation executive director Nichol Whiteman noted that with support from the team and its fans, the organization was able to grow the number of Dreamfields from four in 2003 to 50 this year.

“This is our chance to look around and celebrate what brings us together instead of what divides us,” she said before introducing Dodgers RBI (Revising Baseball in Inner Cities) participant Bella Ramirez.

An eloquent and poised Ramirez gave an emotional speech about the program’s power, noting that the field she played on before RBI got involved was an embarrassment. “Nobody cared. The field was our trash can. I wanted to quit,” Ramirez recalled. However, after the community park became a Dodgers Dreamfield, interest in baseball — and the newly launched softball program there — skyrocketed to the point where there’s now a wait list to play as she learned how to be a leader both on the field and off.

Goldlink Teams Up with Miguel on New Single "Got Friends"