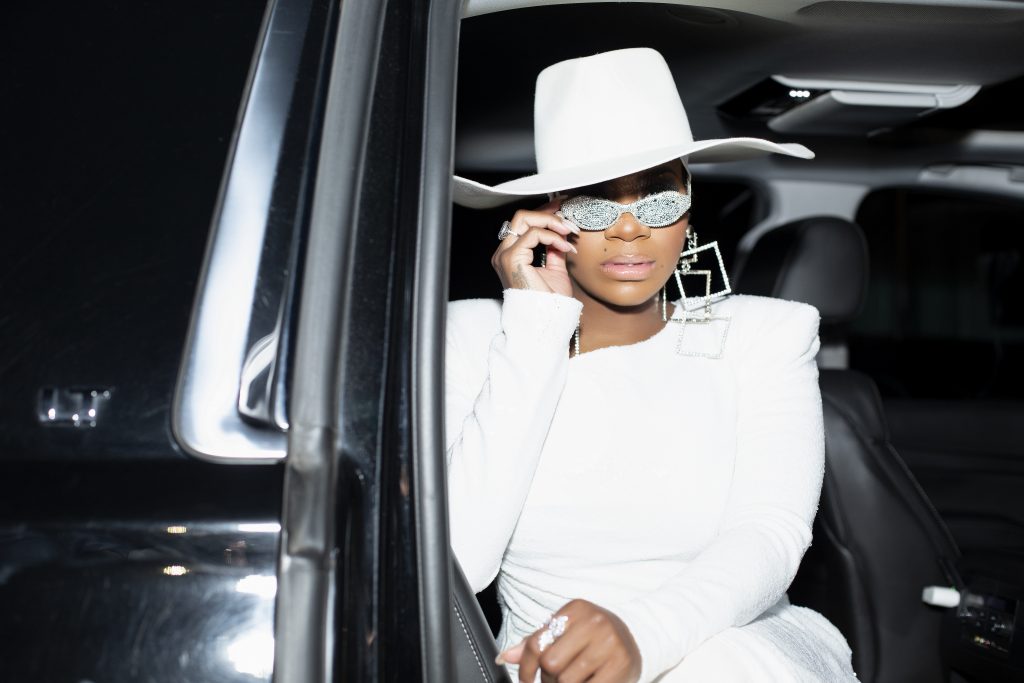 It’s been 15 years since Fantasia Barrino took the nation by storm after winning the third season of “American Idol.” Although fans of the celebrated songstress continue to respect and acknowledge her almost two decades as a shining star, she feels as if things are just getting started. Now, three years after the release of her rock-soul album, The Definition Of… — and two since her first Christmas album — the Grammy winner is back with new music and fans aren’t the only ones excited about it.

Titled Sketchbook, the seventh studio album is a gritty, coming out party for Fantasia who wants to paint her own story and show that through all of her ups and downs, she’s stronger than ever.

An eminent 12-track LP, Sketchbook is sprinkled with hints of traditional Fantasia, but spearheaded by newer sounds and vibes. With hopes to reach new heights with the project, the singer-songwriter and actress has taken this opportunity to explore multiple genres and sounds she’s always respected.

Take for instance her song “Holy Ghost.” It’s equipped with a trap-style beat, and touches on explaining and expressing who she is — especially as a performer. Then you have a track like “Bad Girl” where Fantasia hones in on her love for rock-soul music. And while they are two different vibes from her, they both embody who she is and who she has become. Don’t think that she doesn’t do her due diligence when it comes to putting together her tracks that display her sound though. The songstress revealed that she’s got to give it up to the legendary artists who provided her with the inspiration to dive into the sound: Aretha Franklin and Tina Turner.

“I wanted to have that soul — that that type of soul that pumps you dead in your chest when you hear a song,” she said during her chat with ThisIsRnB. “This album is something y’all ain’t never heard from Fantasia, and I get tickled every time I think about it. Listen to it because I think it’s gonna be a shocker.”

The name and artwork for the album originated as organically as they come. As Fantasia explains, the studio where she recorded the project had a clean, neat, and high energy comparable to none other. Artwork canvassed the walls and created a peaceful atmosphere. It made her want to know: where did all of it come from? And according to the owner of the studio, it was the work of his mother-in-law. In true Fantasia fashion, she insisted on meeting her. So, the owner brought her in the next day so the two could become acquainted.

Sketchbook also comes with an exciting collaboration alongside multi-talented artist T-Pain. The single, “PTSD,” was offered as the second release from the album and if you haven’t heard it yet, its topic is not about what you’re probably thinking it is. Taking the acronym and giving it new meaning, the letters PTSD are short for “post traumatic sex disorder” and offers up a sultry, bass beating track that may be a little different from what you’re used to hearing from her. The collaboration, however, wasn’t just by chance. Fantasia said that she’s always wanted to work with the multi-dimensional singer and rapper since his red hot days of cranking out legendary features on dozens of other artist’s tracks.

Although fans can appreciate the seductive collaboration between Fantasia and T-Pain, there’s one highly anticipated collaboration that will not be on the album. In June, Fantasia announced that she was teaming up with R&B powerhouses Brandy and Jazmin Sullivan for what could have been an unforgettable track. They even recorded the music. Unfortunately though, she said politics got in the way, derailing the potentially magical collaboration of music royalty. No need to fret though as there are several artists she’d like to team up with in the near future and hopefully, it’ll come to light the next time around.

“I’m gonna still say Brandy and Jaz, but I’m gonna put Jessie J in there, too,” she said. “You know what? I would like to see just a movement of women, so I’m gonna say Jessie J, Brandy, Jaz. I’m gonna also put Lizzo on there because she’ll bring a little rap, you know what I mean? I’ma put Missy on there too; don’t get me started.”

The name Sketchbook is fitting for Fantasia’s stage in her career. She’s setting the record straight on her life, and not letting someone else convey that story for her any longer. This project is her first independent album (outside of 2017’s holiday offering), which is a welcomed feat, but it has also come with many challenges. Without going into detail, she revealed that setbacks led to the album’s release date being pushed back.

“You know, anything that you’re building that is great is gonna come with some setbacks, so that was one of the setbacks that I will talk about. It was supposed to be out a while ago, but hey, we had to get it right and we got it right.”

What also came with an independent album was the songstress unabashedly holding her team to a higher standard. And while that may have been challenging for all involved, the “When I See U” belter believes that without challenges, people can get bored within the music industry and not produce their best work. According to the talented beauty, “the gift must be challenged.”

“We created every song that you’re gonna hear on this album from scratch. And the way it was created [was] we took three days out of the studio where I made everybody just go watch the Queen movie (“Bohemian Rhapsody”) three times. They could’ve probably killed me or cussed me out or they probably were mad. I didn’t care.”

While Fantasia’s team can most likely cite her as a strong influence in impacting their work ethic, she has her own influence: her husband. Both most recently and in the past, she’s been open about the role he plays in her life and how much he’s impacted her music career. Recently catching heat for comments made during an interview on The Breakfast Club morning show, she explained that women should be willing to “submit” to their men in relationships and allow them to be the head of the household. Though it was her own opinion, the statement set social media ablaze with many disagreeing, and others believing that she had a point. Standing firm in her beliefs, she furthered her comments by saying that this album came to fruition in large part thanks to her significant other.

“My husband is a Leo. They’re very like “whatever comes, we gone handle it.” Whatever is whatever [with him] and so I thank God for a man that kind of encourages me when I just can’t see it. I’m just like nope, I don’t know why this is going wrong. He’s just like “babe, watch, watch it all work out.””

“This whole album to me is my baby,” she began. “I think it’s been a long time coming. I think it’s long overdue, but it happened right when it was supposed to happen.”

The album has already gotten a good head start with its lead single, “Enough,” which reached number two on the Billboard Adults R&B Songs chart. Once the album drops though, it’s suspected that it will have a quick journey to the top of the charts and its supporting tour, “The Sketchbook Tour” — featuring special guests Robin Thicke, Tank and The Bonfyre —  is only expected to help its rise.

“The Sketchbook Tour” kicks off on October 17 in Colombia, SC while Sketchbook, the album, hits all platforms on Friday, October 11.

JoJo Gets Personal With Visual To New Single "Joanna"